Probability-Based Drummer Leaves The Beats Up To Chance

Drum machines may seem like one of the many rites of passage for hardware makers, they’re a concept you can implement simply or take into the extreme making it as complex as you want. [Matt’s] DrumKid is one of them, and its long development history is wonderfully documented in the project logs.

[Matt’s] original intention was to use the automatic drummer as part of his band, wanting “the expressiveness of a good drummer but without the robotic tendencies of a simple drum machine”. For that, he created the first iteration of the DrumKid, a web-based project using the Web Audio API. The interface consisted of bars showing levels for different settings which could be intuitively tweaked, changing the probability of a drum sound being played. This gave the “drummer” its unpredictability, setting itself apart from any regular old drum machine.

Fast forward a few years, and [Matt] now wants to recreate his DrumKid as a proper piece of musical gear, porting the concept into a standalone hardware drum machine you can plug into your mixer. He decided to go with the Arduino framework for his project rather than the Teensy platform in order to make it cheaper to build. The controls are simplified down to a few buttons and potentiometers, and the whole thing runs off of three AAA batteries. Also, targeting the project for hardware like this allowed for new features to be added, such as a bit-crush filter.

We already saw the first prototype here on Hackaday when it was featured in a Hackaday Prize mentor session, and it’s nice to see how the project evolved since. After a number of revisions, the new prototype takes design cues from Teenage Engineering’s “Pocket Operator” drum machine, using the main PCB as its own faceplate rather than a 3D printed case in a familiar way we’ve seen before. Unfortunately, the latest board is non-functional due to a routing mistake, but you can see the previous working prototypes in his project logs.

The HackadayPrize2019 is Sponsored by:

[Shawn] recently overhauled his access control by fitting the doors with some RFID readers. Though the building already had electronic switches in place, unlocking the doors required mashing an aging keypad or pestering someone in an adjacent office to press a button to unlock them for you. [Shawn] tapped into that system by running some wires up into the attic and connecting them to one of two control boxes, each with an ATMega328 inside. Everything functions as you would expect: presenting the right RFID card to the wall-mounted reader sends a signal to the microcontroller, which clicks an accompanying relay that drives the locks.

You may recall [Shawn's] RFID phone tag hack from last month; the addition of the readers is the second act of the project. If you’re looking to recreate this build, you shouldn’t have any trouble sourcing the same Parallax readers or building out your own Arduino on a stick, either. Check out a quick walkthrough video after the jump.

Watering the plants while you're on holiday

This robot waters the plants while you're on holiday! You have to line up the plants and through a GUI in Microsoft Access you can input the water demands per plant (how many times per week the plant needs water and how much). The water reservoir contains a mixer and an aeration unit (through lego compressors) to avoid dead water. The only thing not lego about it is the water pump and the robot is controlled by an Arduino Duemilanove. I've used a selfmade multipurpose motor driver pcb so all the electronics visisble aren't used ;)

Navigate around via ultrasound

Hello everyone. My ultrasonic sensors arrived (4 in total) but instead of using them on my scrapbot, i found some 360 degree servos that i had gathering dust from a previous project.so i decided to make use if them. The scrapbot was too loud because of the build materials so i settled with this.

In the video it has the distance set to 30cm.

Body: Tamiya universal board (leftover from an onld tank project)

Lurking a few months now in this forum I've been learning from all of you. I started assembling and playing with some Dagu robots like the Adventure bot and mini-biped and other kits available here locally, but practically the platforms were ready and the codes were complete and had to be just applied or sometimes tweaked. 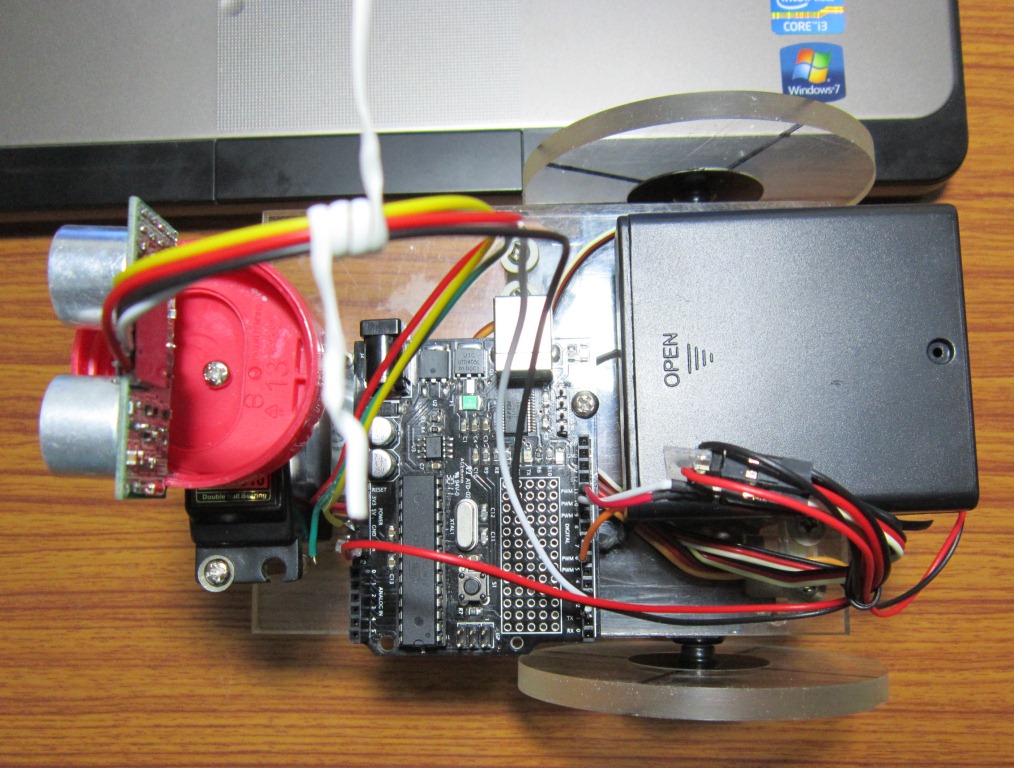 Vacuums the floors, navigates through the room with an optimized algorithm. Pays attention to edges and corners to clean well.

Hey guys, its me again.
This is the third project I submit here.
Vacuuminator is a (obviously) vacuum cleaning robot. It is quite similar to a roomba. I have this problem about not buying robots if I can build one. As you would expect from a guy like me (and you) I don't clean much. I needed something to do that for me.

Therefore, I built vacuuminator (and made him clean the mess I've made while building it.)

Plays a game with you through an xylophone

Hi there LMR, here is another one of our projects, as promised. :)
This is Xylomatron. It is a robot that you can play a game similar to "Simon Says" but with a xylophone interface. Basically, it does play a note and expect you to repeat it, if you succeed it adds another note to the previous sequence and expect you to do the same. Therefore the game gets harder at each level, depending on your memory.
When you fail, it gets quite angry thinking "The puny human couldn't memorize X notes" (it does really trace it in fact :D)

It is a pet. It can stay on tables without falling, navigates around via IR sensor, interacts with people

Hey guys,
Just found out about LMR and wanted to share some of the robots we have made in past. (so, I will post 4-5 more projects soon)

Jeffrey The Quadruped is a quite small walker with 4 legs. It has printed circuit board with a custom arduino setup, using an Atmega328.
It has a Sharp IR Rangefinder attached on 2 servos and uses a simple rotational object tracking algorithm to let him create temporary low resolution visual maps. This way it can stay on a table, stay away from objects and even track your hands with a single sensor.

I built this super basic robot as a start-here style bot for a presentation I'm doing in a few weeks. I wanted something I could demonstrate building in realtime to a group of boyscouts. Simon is built with an arduino, dfrobot protoshield, breadboard, 2 parallax continuous rotation servos, 2 solarbotics wheels, a caster and a digital ir sensor. The whole thing is built with double sided tape (fritz start-here bot style). I should be able to demonstrate assembling him and uploading his program in about 15 minutes during my presentation.

A transmitter kit for just about any robot project