Check your run time on a stretchable electroluminescent stopwatch ‘tattoo’

Imagine if your watch wasn’t mounted on your wrist, but was instead integrated into a sort of temporary tattoo on the back of your hand? Such an idea is now one step closer to reality, thanks to new research into alternating-current electroluminescent (ACEL) display technology.

While normally such displays require well over 100VAC to produce sufficient brightness, scientists have worked to get this number down into the 10-35V range, allowing them to be used in much closer proximity to human skin.

To demonstrate this technology, the team constructed a 4-digit 7-segment display that can be applied to one’s hand, using an Arduino Mega and driver circuitry to turn it into a digital timepiece.

More information can be found in the researchers’ paper published in ACS Materials Letters.

3 Reasons You Should Register For Maker Faire Shenzhen Now

This year, Maker Faire Shenzhen 2019 will be focusing on the theme “To the Heart of Community, To the Cluster of Industry”. With a full chain events for technological innovations, you can look forward to the Maker Summit Forum, Maker Booths (includes highlights and performances), as well as Innovation workshops. […]

The post 3 Reasons You Should Register For Maker Faire Shenzhen Now appeared first on Make: DIY Projects and Ideas for Makers.

Imagine if you had whiskers. Obviously, this would make you something of an oddity in today’s society. On the other hand, you’d be able to sense nearby objects via the transmission of force through these hair structures.

In order to explore this concept, Chris Hill has created a whisker assembly for sensory augmentation, substituting flex sensors for the stiff hairs that we as humans don’t possess. The sensors—four are used here—vary resistance when bent, furnishing information about their status to the Arduino Uno that controls the wearable device. Forehead-mounted vibratory motors are pulsed via PWM outputs in response, allowing the user to feel what’s going on in the surrounding environment.

If this looks familiar, Hill is quick to credit Nicholas Gonyea’s Whisker Sensory Extension Wearable as the basis for this project. He hopes his take on things improves the original, making it lighter, more cost-effective, and easier to construct.

The purpose of this project was to focus on the creation of novel, computationally-enriched “sensory extensions” that allow for augmented-sensing of the natural world. My major effort with this project was devoted to the fabrication and implementation of sensory augmentations that will extend a sense through sensors and respond with a tactile output for the user. The intent is to enable anyone to fabricate their own sensory extensions, and thusly map intrinsically human/animal senses onto hardware. Effectively extending our senses in new and exciting ways that will lead to a better understanding of how our brain is able to adapt to new external senses.

GymSoles ensure correct form and posture during your workout

While you can get a very good workout on your own, it’s ideal if you have someone else watching over your form. This, of course, isn’t always practical, so researchers at the University of Auckland’s Augmented Human Lab have prototyped a wearable system called GymSoles to help.

GymSoles consist of a pressure-sensitive insole that is used to determine a foot’s center of pressure, and thus infer whether or not the participant is keeping the weights in the proper position relative to his or her body—perfect for exercises like squats and deadlifts.

Feedback is provided visually as well as through tactile feedback via eight vibrating motors, allowing participants to modify technique without having to focus on a screen. A computer is used to control the device using an Arduino Uno with motor drivers and an I2C multiplexer.

The correct execution of exercises, such as squats and dead-lifts, is essential to prevent various bodily injuries. Existing solutions either rely on expensive motion tracking or multiple Inertial Measurement Units (IMU) systems require an extensive set-up and individual calibration. This paper introduces a proof of concept, GymSoles, an insole prototype that provides feedback on the Centre of Pressure (CoP) at the feet to assist users with maintaining the correct body posture, while performing squats and dead-lifts. GymSoles was evaluated with 13 users in three conditions: 1) no feedback, 2) vibrotactile feedback, and 3) visual feedback. It has shown that solely providing feedback on the current CoP, results in a significantly improved body posture.

Go all cyberpunk with this laser-spiked jacket!

Your leather jacket might look cool, but one thing it’s missing—unless you’re maker “abetusk” or perhaps a Japanese musician—is lasers!

After seeing Yoshii Kazuya’s laser-spiked outfit, ‘tusk decided to create an excellent version of the getup by embedding 128 laser diodes embedded in his own jacket. These lasers are powered by an Arduino Nano, along with a pair of I2C PWM output boards, allowing them to be switched in sets of four.

The lasers can be controlled either by joystick, via a microphone in order to react to sound, or in a looping ‘twinkle’ pattern.

More information on the project is available in this write-up as well as on GitHub, which includes Arduino code and other files needed to build your own.

After seeing Wei Chieh Shi’s laser jacket design, I wanted to create my own. These instructions show how to modify a jacket to add laser diodes and control them electronically to produce different laser light patterns. The laser diodes give the jacket an appearance of being “spiky”, like having metal spikes but with red laser light. The effect is especially striking in environments with fog or smoke as the laser light path shows a trail from where it originates.

The concept and execution is relatively simple but care has to be taken to make sure that the electronics, wiring and other aspects of the jacket don’t fail when in use. Much of the subtlety and complexity of the project is providing proper wire routing and making sure that strain relief for the electronics and connections is provided so that it’s resilient under normal wear.

Assuming the basic parts are available (soldering iron, multimeter, wire strippers, laser cutter, etc.) I would estimate that this project is about $300 in raw materials and about 20 hours worth of labor.

Depending on the battery used, the jacket can operate for about an hour or two continuously. Spare batteries can be carried around and used to replace the depleted batteries if need be. 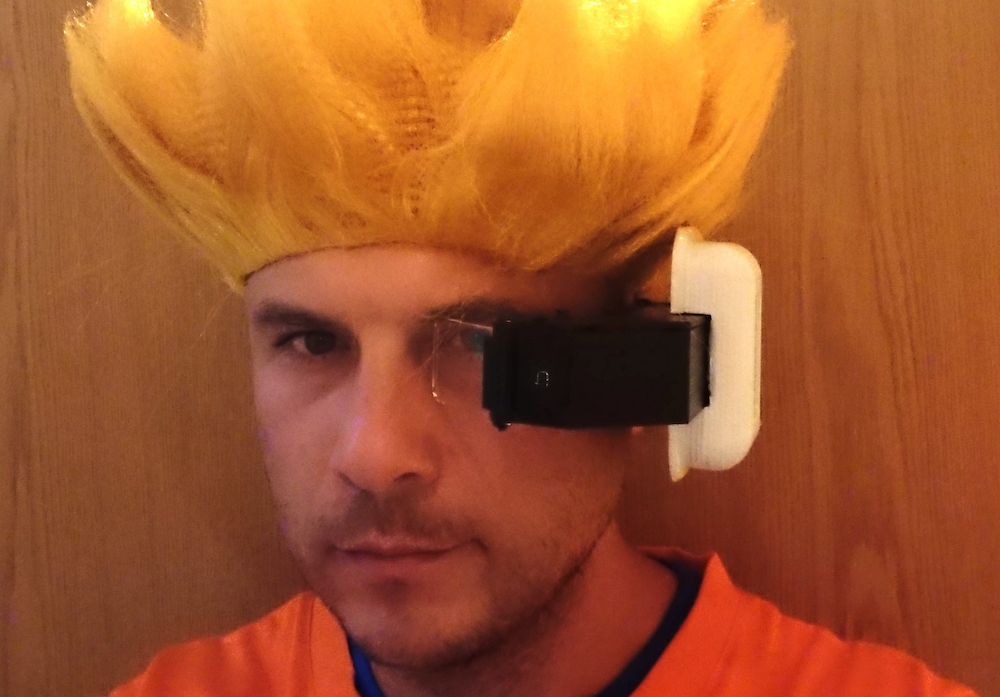 Those familiar with the Dragon Ball Z franchise will recognize the head-mounted Scouter computer often seen adorning character faces. As part of his Goku costume, Marcin Poblocki made an impressive replica, featuring a see-through lens that shows the “strength” of the person he’s looking at, based on a distance measurement taken using a VL53L0X sensor. 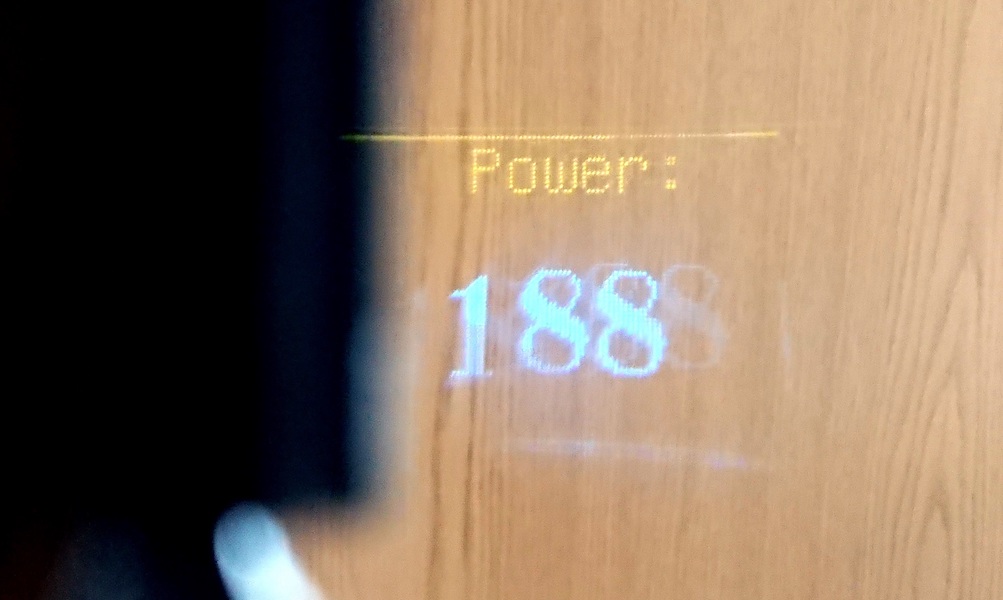 An Arduino Nano provides processing power for the headset, and light from a small OLED display is reflected on the lens for AR-style viewing.

So you will still see everything but in the clear Perspex you will also see distance to the object you looking at. On OLED screen I typed ‘Power’ instead distance because that’s what this device suppose to measure in DBZ.

Print files as well as code and the circuit diagram needed to hook this head-mounted device up are available on Thingiverse. For those that don’t have a DBZ costume in their immediate future, the concept could be expanded to a wide variety of other sci-fi and real world applications. 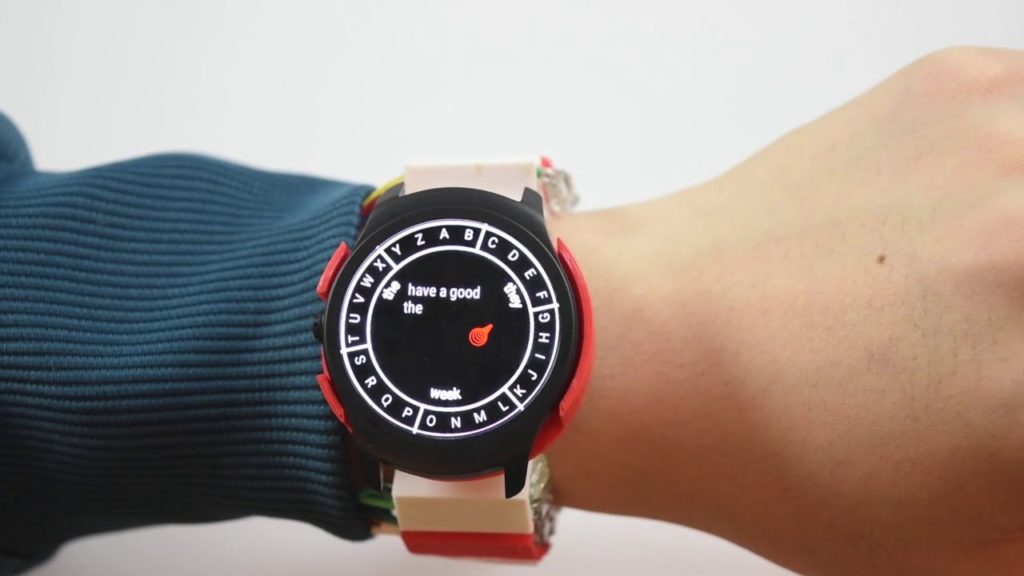 Smartwatches can keep us informed of incoming information at a glance, but responding still takes the use of another hand, potentially occupied by other tasks. Researchers at Dartmouth College are trying to change that with their new WrisText system.

The device divides the outside of a Ticwatch 2 into six sections of letters, selected by the movement of one’s wrist. As letters are chosen, possible words are displayed on the screen, which are then selected automatically, or by rubbing and tapping gestures between one’s finger and thumb.

The prototype employs an Arduino DUE to pass information to a computer, along with proximity and piezo sensors to detect hand and finger movements.

We present WrisText – a one-handed text entry technique for smartwatches using the joystick-like motion of the wrist. A user enters text by whirling the wrist of the watch hand, towards six directions which each represent a key in a circular keyboard, and where the letters are distributed in an alphabetical order. The design of WrisText was an iterative process, where we first conducted a study to investigate optimal key size, and found that keys needed to be 55o or wider to achieve over 90% striking accuracy. We then computed an optimal keyboard layout, considering a joint optimization problem of striking accuracy, striking comfort, word disambiguation. We evaluated the performance of WrisText through a five-day study with 10 participants in two text entry scenarios: hand-up and hand- down. On average, participants achieved a text entry speed of 9.9 WPM across all sessions, and were able to type as fast as 15.2 WPM by the end of the last day.

More information can be found in the project’s research paper, or you can see it demonstrated in the video below.

So many good speakers and projects

Keep track of each high five for a whole weekend!

The post Hacking Together A Smart Glove to Count High Fives at World Maker Faire appeared first on Make: DIY Projects and Ideas for Makers.