Cheating At Bowling, The Hacker Way

Anyone who has ever gone to a bowling alley will know the preferred (but ineffective) technique to telepathically control a bowling ball. [Mark Rober] and [James Bruton] decided to change that and hacked a bowling ball that can be steered remotely (and discreetly), simply by leaning your body.

They started with a standard bowling ball, that was

cut in half and hollowed out on a lathe. A beam sits on the centre line of the ball, mounted on a bearing in each half to allow the ball to spin around it. Steering done by shifting the centre of mass, by moving a steel pendulum that hangs below the beam side to side with heavy-duty servo. The servo is controlled with an Arduino, and an IMU to detects the balls orientation. Power is provided by and RC Lipo battery. The wireless controller is a sneaky little device that is taped to [Mark]’s back and covered with clothing, and steers the ball by detecting how far he leans with an IMU module. The brain is an Arduino Mini and an NRF24L01 provides the RF link.

While it’s not an easy build, it’s a fairly simple system electronically, with off the shelf electronics modules and perfboard. The genius is in the implementation and its entertainment value. The look on the kids faces when [Mark] “telepathically” controls the ball, after showing off the fact that he has zero natural ability, is absolutely priceless. [Mark Rober], a former NASA engineer, has made a name for himself with viral Youtube videos on cool projects like a glitter booby trap for package thieves and a liquid sand hot tub. [James Bruton], a former toy designer is known for his robotics prowess that he has put on display with OpenDog and functional Star Wars robots.

For us this hack is a perfect example of one that entertains and inspires, a powerful combination for young and old alike. Check out the awesome video after the break.

Adaptive Spoon Helps Those With Parkinson’s

There are a lot of side effects of living with medical conditions, and not all of them are obvious. For Parkinson’s disease, one of the conditions is a constant hand tremor. This can obviously lead to frustration with anything that involves fine motor skills, but also includes eating, which can be even more troublesome than other day-to-day tasks. There are some products available that help with the tremors, but at such a high price [Rupin] decided to build a tremor-compensating utensil with off the shelf components instead.

The main source of inspiration for this project was the Liftware Steady, but at around $200 this can be out of reach for a lot of people. The core of this assistive spoon has a bill of material that most of us will have lying around already, in order to keep costs down. It’s built around an Arduino and an MPU6050 inertial measurement unit with two generic servo motors. It did take some 3D printing and a lot of math to get the utensil to behave properly, but the code is available on the project site for anyone who wants to take a look.

This project tackles a problem that we see all the time: a cost-effective, open-source solution to a medical issue where the only alternatives are much more expensive. Usually this comes up around prosthetics, but can also help out by making biological compounds like insulin directly for less than a medical company can provide it. 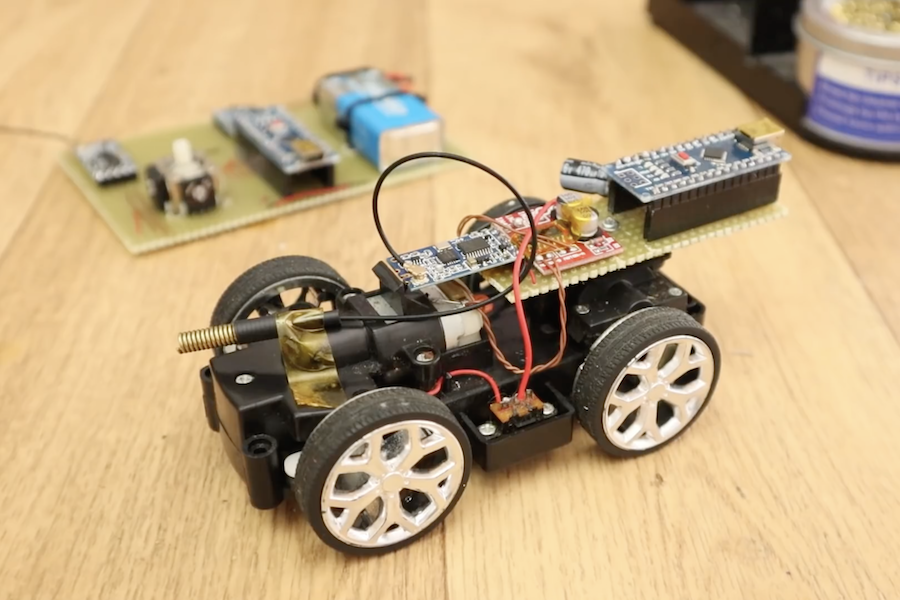 When piloting a vehicle remotely, it’s only natural to tilt your controller one way or the other to “help” guide it in the right direction. While usually this has no effect whatsoever, YouTuber Electronoobs decided to take this concept and run with it, creating a remote control transmitter that responds to an onboard MPU-6050 inertial measurement unit. 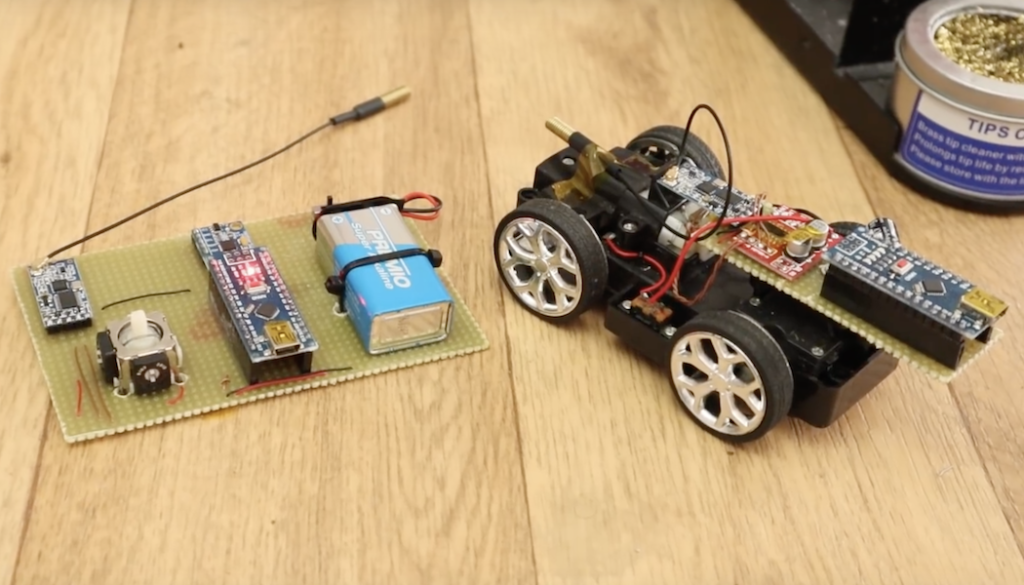 The transmitter’s Arduino Nano takes movement data, and sends the corresponding signals to a custom receiver board on the RC car via a pair of HC-12 wireless modules. A second Arduino mounted in the car then commands the vehicle’s DC motors with the help of an H-bridge.

This is a radio controller that has 2 analog channels and the data is out from a MPU-6050 gyro module. So, we could control a toy car for example just by rotating the controller. I usually use the nRF24 module, but in this project I also want to show you how to use the HC-12 module. You will learn how to get the IMU data, how to use the HC-12 radio connection and how to control 2 DC motors using PWM signals and an H-bridge.

It’s quite a versatile build, and it can even be set up to output PWM signals if you need to interface with more advanced electronics.

I'm currently a sophomore at Worcester Polytechnic Institute studying Robotics Engineering. The third course in the series, RBE 2002, focusing on sensors. In a group of 4 students, we built a robot that could autonomously navigate a maze, locate a flame, put it out and report its X,Y, and Z position relative to its starting position. The robot was required to use an IMU and a flame sensor provided to us. All other sensors and parts are up to the group to use to complete the challenge.

I'm currently a sophomore at Worcester Polytechnic Institute studying Robotics Engineering. The third course in the series, RBE 2002, focusing on sensors. In a group of 4 students, we built a robot that could autonomously navigate a maze, locate a flame, put it out and report its X,Y, and Z position relative to its starting position. The robot was required to use an IMU and a flame sensor provided to us. All other sensors and parts are up to the group to use to complete the challenge.

[Florian] has been putting a lot of work into VR controllers that can be used without interfering with a regular mouse + keyboard combination, and his most recent work has opened the door to successfully emulating a Vive VR controller in Steam VR. He uses Arduino-based custom hardware on the hand, a Leap Motion controller, and fuses the data in software.

We’ve seen [Florian]’s work before in successfully combining a Leap Motion with additional hardware sensors. The idea is to compensate for the fact that the Leap Motion sensor is not very good at detecting some types of movement, such as tilting a fist towards or away from yourself — a movement similar to aiming a gun up or down. At the same time, an important goal is for any added hardware to leave fingers and hands free.

[Florian]’s DIY VR hand controls emulate the HTC Vive controllers in Valve’s Steam VR Tracking with a software chain that works with his custom hardware. His DIY controller doesn’t need to be actively held because by design it grips the hand, leaving fingers free to do other tasks like typing or gesturing.

Last time we saw [Florian]’s work, development was still heavy and there wasn’t any source code shared, but there’s now a git repository for the project with everything you’d need to join the fun. He adds that “I see a lot of people with Wii nunchucks looking to do this. With a few edits to my FreePIE script, they should be easily be able to enable whatever buttons/orientation data they want.”

We have DIY hardware emulating Vive controllers in software, and we’ve seen interfacing to the Vive’s Lighthouse hardware with DIY electronics. There’s a lot of hacking around going on in this area, and it’s exciting to see what comes next.

Teach your drone what is up and down with an Arduino

Gyroscopes and accelerometers are the primary sensors at the heart of an IMU, also known as an internal measurement unit — an electronic sensor device that measures the orientation, gravitational forces and velocity of a multicopter, and help you keep it in the air using Arduino.

Two videos made by Joop Brokking, a Maker with passion for RC model ‘copters, clearly explain how to program your own IMU so that it can be used for self-balancing your drone without Kalman filters,  libraries, or complex calculations.

Very often people ask me how to make an auto level feature for their multicopter. The answer to a question like this is pretty involved and cannot be explained in one email. And that is why I made this video series.

You can find the bill of materials and code here.

Here’s proof that you can build cool stuff with simple tools. This self-balancing unicycle uses an Arduino and a five degree of freedom IMU from Sparkfun to keep the rider upright. Well, it’ll keep you upright as long as you have good side-to-side balance. But that’s true of any unicycle, right?

The Raptor was built by [Nick Thatcker] who is no stranger to self-balancing transportation. A few years back he built a Segway clone and the same type of geared motor used in that project also went into this one. I connects to the wheel with a chain, allowing him to keep the motor hidden in the saddle. He gets between 90 and 120 minutes of used on one charge with a top speed of 10 MPH. The motor could move you along faster but he has limited this in firmware to ensure it has enough power to ‘catch up’ if you lean too far forward.

Don’t miss the demo after the break. If you like this unicycle there are several others worth looking at.

[Willy Wampa] is showing off his self-balancing robot. What strikes us about the build is how well tuned his feedback loop seems to be. In the video after the break you will see that there is absolutely no visible oscillation used to keep its balance.

The parts used are quite easy to obtain. The acrylic mounting plates are his wife’s design and were custom cut through the Pololu service. They were also the source of the gear motors. He’s using a SparkFun IMU with an Arduino and a motor shield. He first posted about the build about a month ago, but the new revision switches to a Pololu motor driver shield which he says works much better, and adds control via a wireless Wii Nunchuck.

The PID loop which gives it that remarkably solid upright stance is from a library written by [Brett Beauregard]. Once again the concept of open source lets us build great things by standing on the shoulders of others.

I've never programed anything before so naturally I'm struggling a bit.

I've got some code that calculates an angle from the accelerometer reading & I need to do the same for the gyro reading to feed into a complimentary filter. However it's not working & I haven't figured out why. (I've used the lirbray built by Jeff Rowberg and some of his code too).

Please have a look at the code attached & see if you can help me out a little.