Walking robots come in many forms, and each presents their own unique challenges. Bipedal style locomotion is considered particularly difficult to do well, however designs with more legs offer certain advantages. Hexapods offer the possibility of keeping several legs on the ground while others move, providing a useful degree of stability. [How To Mechatronics] developed this ant robot, which is an excellent example of the form.

The hexapod has as the name suggests, six legs, each of which consist of 3 joints. This necessitates 3 servos per leg, for 18 servos total just for locomotion. Further servos are then used to control the abdomen, head, and mandibles. This gives the robot strong ant credentials, above and beyond being simply a 3D printed lookalike.

Brains come courtesy of an Arduino Mega, chosen for its ability to control a large number of servos. A custom PCB is printed as a shield to ease the connection of all the necessary hardware. An HC-05 Bluetooth module is used for communication with an Android app, which controls the ant. The piece de resistance is the ultrasonic sensors in the head, which allow the ant to automatically defend itself against predators that get too close.

It’s an involved build, requiring plenty of 3D printing and over 200 fasteners. Fundamentally though, it’s a fully working and tested hexapod build with full plans available for download, ready to toil in your underground sugar caves.

If your hexapod tastes skew more anime than insectoid, check out this Ghost in the Shell build. Video after the break.

[Thanks to Baldpower for the tip!]

Arduino Mega is the brains of this ant-like hexapod 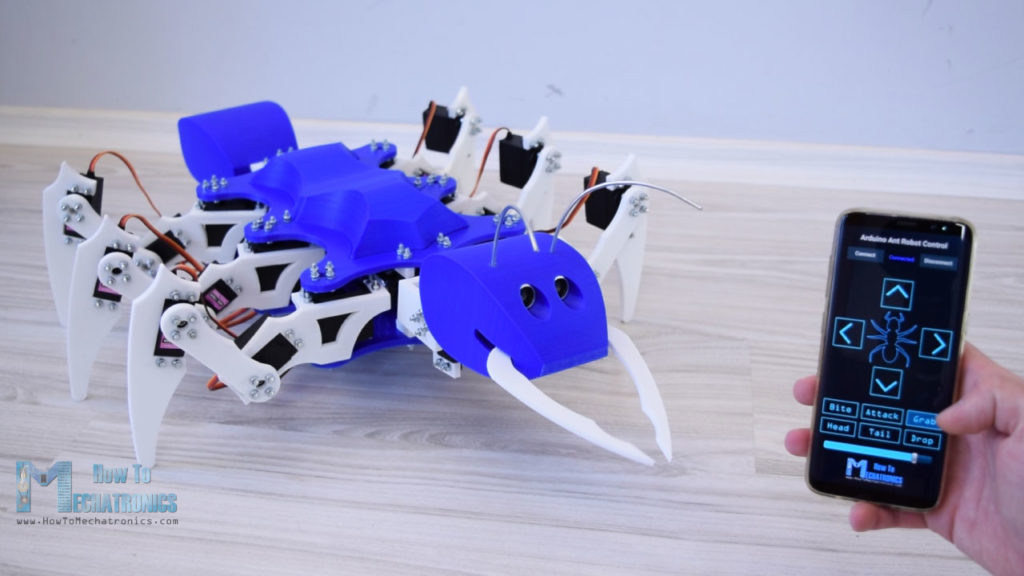 Six-legged robots are nothing new, but if you’d like inspiration for your own, it would be hard to beat this 22 servo-driven, 3D-printed hexapod from Dejan at How To Mechatronics.

The ant-inspired device features three metal geared servos per leg, as well as a pair to move the heat, another for the tail, and a micro servo to activate the mandibles.

To control this large number of servos, Dejan turned to the Arduino Mega, along with a custom Android app and Bluetooth link for the user interface. While most movements are activated by the user, it does have a single ultrasonic sensor buried in its head as “eyes.” This allows it to lean backwards when approached by an unknown object or hand, then strike with its mandibles if the aggressor continues its advance.

As the name suggests, the hexapod has six legs but in addition to that, it also has a tail or abdomen, a head, antennas, mandibles and even functional eyes. All of this, makes the hexapod look like an ant, so therefore we can also call it an Arduino Ant Robot.

For controlling the robot I made a custom-built Android application. The app has four buttons through which we can command the robot to move forward or backwards, as well as turn left or right. Along with these main functions, the robot can also move its head and tail, as well as it can bite, grab and drop things and even attack.

You can see it in action and being assembled in the video below, and build files are available here.

After printing pieces to Prusa I3 is the new 4-legged spider with bluetooth comm :)

17 Year-old programs a robot to teach itself to walk!!

My name is Gregory, but you can call me Greg. I am a 17 year-old high school student who is building a very interesting robot(I am also doing all of the designing and prototyping. I am building a six-legged robot, called a "hexapod", that is able to teach itself to walk.

Rana, which is Italian for “frog,” is really an interesting six-legged robot design. The locomotion, which according to their writeup, has never been used before and combines the walking methods of an ant and a frog. This kind of locomotion, as opposed to three-servo based ‘bots that simply rock back […]

This hexapod was made almost entirely via 3d printing (translated). The parts that you need to supply include a few fasteners to make connections, twelve servo motors, and a method of driving them. As you can see in the video after the break, all those parts come together into a little robot that functions quite well. The only thing that we think is missing are some grippy feet to help prevent slipping.

[Hugo] calls the project Bleuette. It is completely open source, with the cad files and source code available on his Github repository. There is additional information in the wiki page of that repo. This gives us a good look at the electronic design. He’s controlling the legs with an Arduino, but it’s all dependent on his own shield which features a PIC 18F452 to take care of the signals used to drive all of the servo motors. The board also has some peripherals to monitor the current draw and regulate the incoming power.

Recently I came across some very good hexapods designed with 6,8 and even 12 servos.I have a duemilanove and would like to build one.

But unfortunately I have not ventured into this domain and my search for a step by step tutorial on google(on multilegged critters like hexapod) and instructables proved futile.Any Links that can help me get started or rather a complete tutorial link would be awesome.Thanks!

LEO 3 Servo Hexapod based on Arduino

I want to build a mini hexapod and i would like a suggestion from you for a cheap servomachine (de kserw an to grafw kala auto) to use, which will be sufficient for this project.. I have found these here on my own: