Non-profits can do great work, and in order to help others visualize the needs they serve and what they are doing, Jason Wolin came up with an amazing map for his organization.

The massive map stretches down 14 feet of a brick wall, with the continents cut out of MDF, and a pair of accompanying LCD TVs that show data about different areas.

Three computers are used for control, two of which are used to play videos on each screen. The third handles overhead map lighting controlled via the DMX protocol to illuminate the map in various configurations. Each of the PCs are coordinated using a trio of Arduino Nanos, allowing video and lighting effects to be displayed in perfect sync.

Having a light on your bike at night is important for safety, but what if those headlights could talk to others sharing the road with you? Well now it can, using the [Bike] Swarm by Alex Berke, Thomas Sanchez, and Kent Larson from the MIT Media Lab.

Their device—or collection of devices—controls a bicycle’s lighting via an Arduino and LED driver, and features an nRF24L01 wireless module to communicate with others in the vicinity. When another rider is encountered, the bikes sync their lights up automatically.

The team has already designed and fabricated prototypes, then strapped them onto local city bike share program bikes for testing.

It’s an interesting effect when two bikes pass, but as shown in the video below, things get much more fascinating when a handful of bikes can coordinate both their direction and light pattern.

As bikes navigate city streets after dark, they are often equipped with lights. The lights make the bikes visible to cars or other bikers, and the hazards of traffic less dangerous.

Imagine that as solitary bikes come together, their lights begin to pulsate at the same cadence. The bikers may not know each other, or may only be passing each other briefly, but for the moments they are together, their lights synchronize. The effect is a visually united presence, as groups of bikes illuminate themselves with a gently pulsing, collective light source.

Few would question the health benefits of ditching the car in favor of a bicycle ride to work — it’s good for the body, and it can be a refreshing relief from rat race commuting. But it’s not without its perils, especially when one works late and returns after dark. Most car versus bicycle accidents occur in the early evening, and most are attributed to drivers just not seeing cyclists in the waning light of day.

To decrease his odds of becoming a statistics and increase his time on two wheels, [Dave Schneider] decided to build a better bike light. Concerned mainly with getting clipped from the rear, and having discounted the commercially available rear-mounted blinkenlights and wheel-mounted persistence of vision displays as insufficiently visible, [Dave] looked for ways to give drivers as many cues as possible. Noticing that his POV light cast a nice ground effect, he came up with a pavement projecting display using four flashlights. The red LED lights are arranged to flash onto the roadway in sequence, using the bike’s motion to sweep out a sort of POV “bumper” to guide motorists around the bike. The flashlight batteries were replaced with wooden plugs wired to the Li-ion battery pack and DC-DC converter in the saddle bag, with an Arduino tasked with the flashing duty.

The picture above shows a long exposure of the lights in action, and it looks very effective. We can’t help but think of ways to improve this: perhaps one flashlight with a servo-controlled mirror? Or variable flashing frequency based on speed? Maybe moving the pavement projection up front for a head-down display would be a nice addition too.

LEDs and MIDIs: Check Out the STEAM-Inspired Music of Holograph 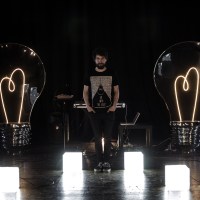 "It's not only a musical project, but a union between different arts and sciences, where the sound meets design, electronics, and computer science"

The post LEDs and MIDIs: Check Out the STEAM-Inspired Music of Holograph appeared first on Make: DIY Projects and Ideas for Makers. 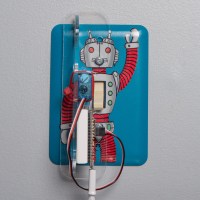 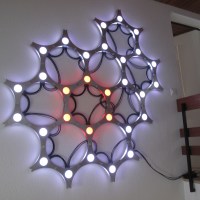 Honeycomb patterns inspired the design behind this light fixture. The modular design means the shape can be reconfigured.

The post Illuminate Your Walls with Beehive-Inspired Modular Lighting appeared first on Make: DIY Projects and Ideas for Makers.

8 Crazy Keyboards That Will Trick Out Your Typing 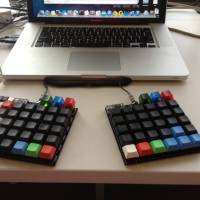 A custom keyboard could be right at your fingertips, so why are you still using that basic keyboard that came with your computer?

The post 8 Crazy Keyboards That Will Trick Out Your Typing appeared first on Make: DIY Projects and Ideas for Makers.

What do you get when you mix together all of the stuff that you can get for cheap over eBay with a bit of creativity and some PVC pipe? [Austiwawa] gets a table lamp, remote-controlled by a toy gun, that turns off and falls over when you shoot it. You’ve got to watch the video below the break.

This isn’t a technical hack. Rather it’s a creative use of a bunch of easily available parts, with a little cutting here and snipping there to make it work. For instance, [Austiwawa] took a remote control sender and receiver pair straight off the rack and soldered some wires to extend the LED and fit it inside the toy gun. A relay module controls the lamp, and plugs straight into the Arduino that’s behind everything. Plug and play.

Which is not to say the lamp lacks finesse. We especially like the screw used as an end-of-travel stop for the servo motor, and the nicely fabricated servo bracket made from two Ls. And you can’t beat the fall-over-dead effect. Or can you? Seriously, though, great project [Austiwawa]! 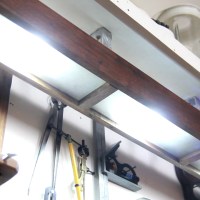 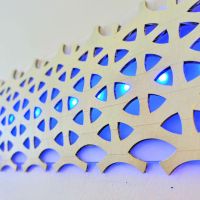 Now you can recreate the infamous dance scene from Ex Machina with some cardboard, LEDs, and Arduino.

The post Party Like a Sci-Fi Billionaire with the Music-Sensing Light from Ex Machina appeared first on Make: DIY Projects, How-Tos, Electronics, Crafts and Ideas for Makers.