When designing my new Touring Machine synth module, two things worry me: the analog I/O section (it must be pitch-accurate) and the user interface. The UI feels like a harder problem because I’m not sure what I want. For the analog part, I can lean on others (like Émilie and Thea), and that puts me [...]
Todbot 03 Sep 21:15
hardware-hacking  music

The Start of the Touring Machine Eurorack module

The original goal of my month-long Deep Fried Neurons project was “30 sounds, one per day”, an exploration into making sounds with Eurorack gear that doesn’t use sequencers or keyboards. While I only create 15 sounds so far (I’ll still do all 30 I think), I’ve been increasingly using some home-built modules like my TrinketTrigger [...]
Todbot 28 Aug 18:40
general  music

I’ve been playing more with algorithmic melody generation by working on my own module I’ve been calling the “Trinket Touring Machine“. Like my previously-mentioned “Trinket Trigger“, this one uses a Trinket M0 running CircuitPython. Initial experiments were in Arduino using the Mozzi audio synthesis library, which totally worked, but CircuitPython is much faster to develop [...]
Todbot 21 Aug 21:27
hardware-hacking  music

I’ve decided to do “30 sounds, one per day”.  I’m a bit behind, but here’s a Youtube playlist of what I have so far and the corresponding Bandcamp album. These are to be sounds. Not tracks, not songs. Just interesting sonic experiments. I want to make sounds I’ve never heard before, or sounds I’ve always wanted [...]
Todbot 07 Aug 20:09
general  music

Daisy is a tiny $29 computer for building custom musical instruments 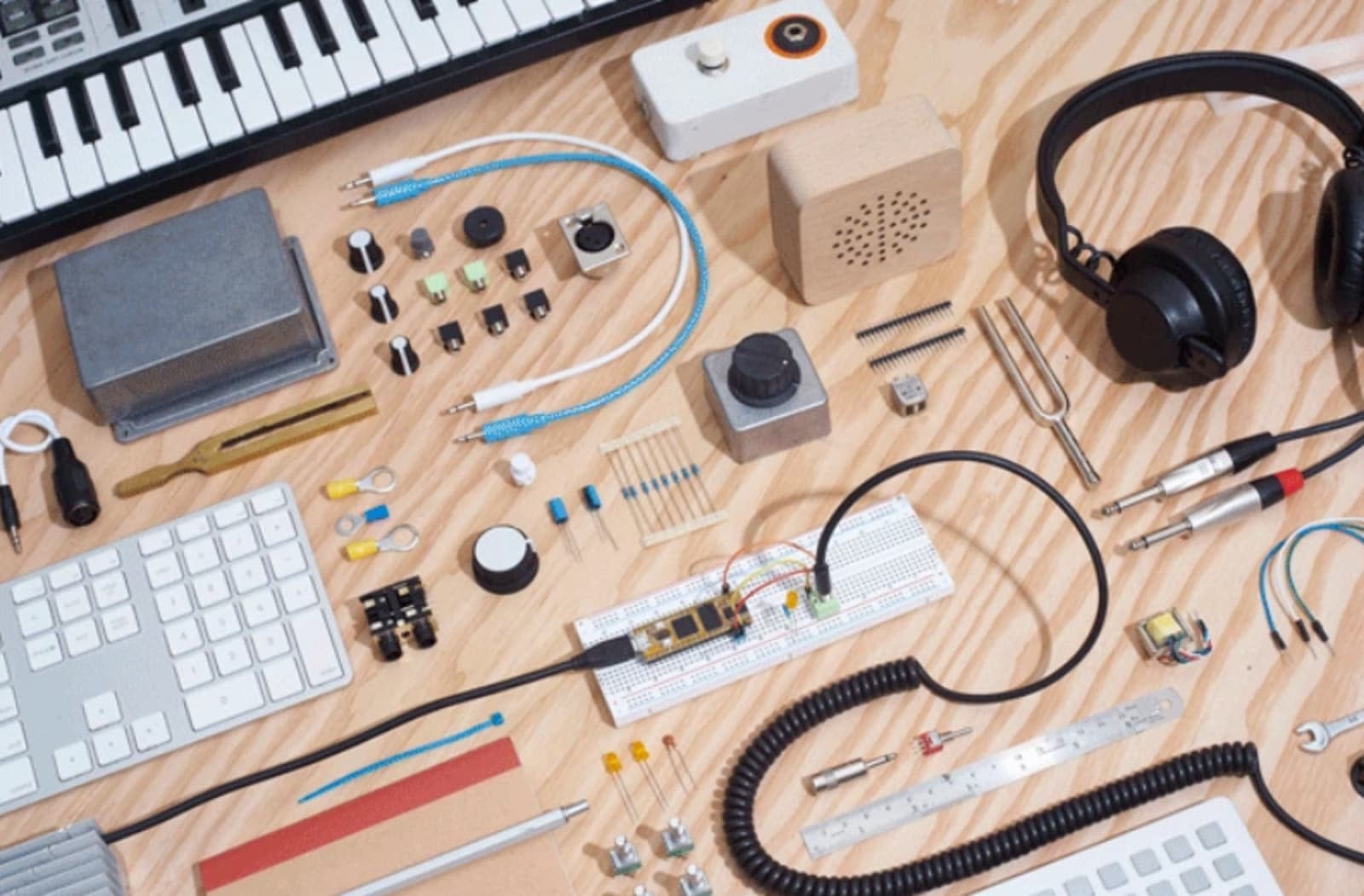 Coding your own musical instruments just got a lot more convenient. Music tech company Electrosmith has launched the Daisy, an open source microcomputer packed with everything you need to code your own pedals, synth, modules and instruments -- and it's the size of a stick of gum.

Daisy is a tiny $29 computer for building custom musical instruments 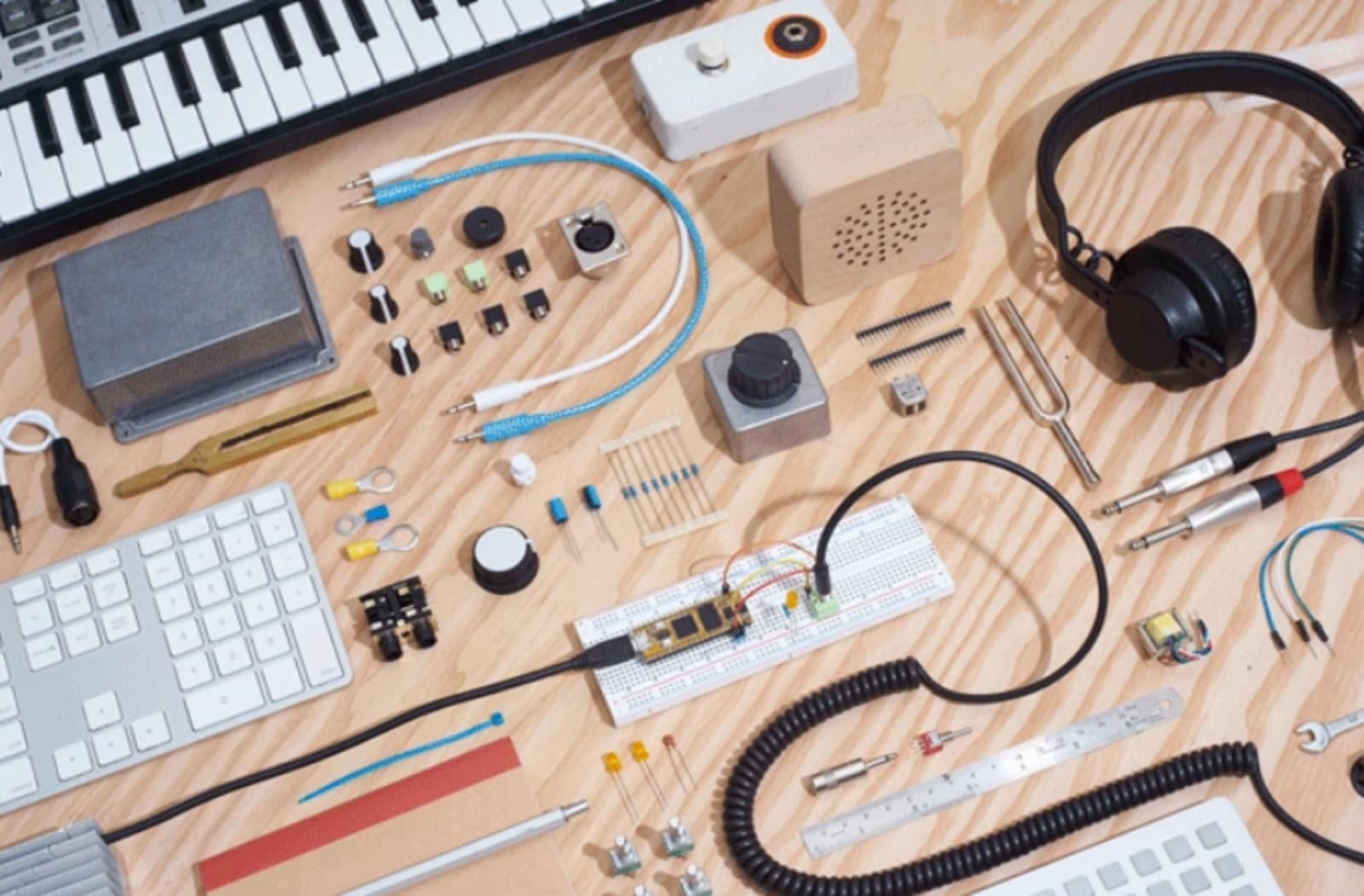 Coding your own musical instruments just got a lot more convenient. Music tech company Electrosmith has launched the Daisy, an open source microcomputer packed with everything you need to code your own pedals, synth, modules and instruments -- and it's the size of a stick of gum.

Some folks bring out an heirloom table runner when they have company, but what if you sewed your own and made it musical? We’d never put it away! [kAi CHENG] has an Instructable about how to recreate his melodic material, and there is a link to his website, which describes his design process, not just the finished product. We have a video below showing a jam session where he exercises a basic function set.

GarageBand is his DAW of choice, which receives translated MIDI from a Lilypad. If you don’t have a Lilypad, any Arduino based on the ATmega328P chip should work seamlessly. Testing shows that conductive threads in the soft circuit results in an occasional short circuit, but copper tape makes a good conductor  at the intersections. Wide metallic strips make for tolerant landing pads beneath modular potentiometers fitted with inviting foam knobs. Each twist controls a loop in GarageBand, and there is a pressure-sensitive pad to change the soundset. Of course, since this is all over MIDI, you can customize to your heart’s content.

MIDI drums come in all shapes and sizes, from a familiar game controller to hand rakes.

Build your child a wooden MP3 player for $100

If your young child wants to listen to music, what better way than a beautiful wooden MP3 “radio,” with an array of buttons that select the album? After being inspired by a similar commercial product, Redditor “DerThes” decided to make such a device for a fraction of the cost using an Arduino Uno for control, along with a Music Maker Shield to play tunes off an SD card.

The toddler can select songs from a grid of 16 input buttons, which are sent to the Uno via a pair of shift registers. There’s also a “parent’s mode” with the ability to choose from up to 99 albums, and a volume knob for… adjusting the volume.

Finally, the unt features a beautiful enclosure made out of oak and black walnut, with corners softened by dowels to reduce collateral damage “after the player has gone airborne.” More details can be seen on Imgur here and on GitHub.

This is an easy to use MP3 player for small children. I made this for my 2 year old for Christmas. Each of the top 9 buttons will play an album. The black buttons on the bottom are prev – play/pause – next. The player also supports an alternative playback mode that can be activated using a special key combination. That combination will turn the buttons into a 10 digit input matrix allowing playback of up to 99 albums. That way the player can be used by parents as well.

See GitHub for more details, the schematics for the button PCB and the firmware. https://github.com/MichaelThessel/arduino-stoerbert

When I first saw the Hoerbert at a friends place I wanted it for my child. After I heard of the $400 price tag I knew that I needed to spend 50 hrs and $100 to build my own.

[Robson Couto] started to get interested in musical projects and as a side effect created downloadable code with simple notation for a good variety of themes, songs, and melodies. They are all for the Arduino and use only the built-in tone() function, but don’t let that distract you. If you look past that, you’ll see that each sketch is a melody that consists of single notes and durations; easily adapted to other purposes or simply used as-is. After all, [Robson] wanted the source of each tune to be easily understood, easily modified, and to have no external dependencies.

All that may sound a bit like MIDI, but MIDI has much more in common with hardware events than music notation because it includes (among other things) note starts and note ends as separate elements. Converting MIDI into a more usable format was a big part of a project that fed Bach music to a neural network and got surprisingly good results.

When doing music projects, sometimes having a recognizable melody represented very simply as notes and durations with only one note at a time can be an awfully handy resource, and you can find them on GitHub. There’s a brief video of the Tetris theme (actual name: Korobeiniki) being played after the break.

Unless you’re very good, personal synths are fun for you — though often quite annoying for onlookers. After making his own wristwatch-based synth in 2016, Clem Mayer decided to build a new version that’s larger and louder than ever, and programmable via an Arduino controller.

Mayer chose the MKR WiFi 1010 here to take advantage of its LiPo charging abilities. This enables the device to be entirely self-contained in its custom housing, with a variety of switches and sliders for an interface.

Users can program their own “tune” to be played back, or even take advantage of a random sequence generated on startup, then modify the sound as it plays live.