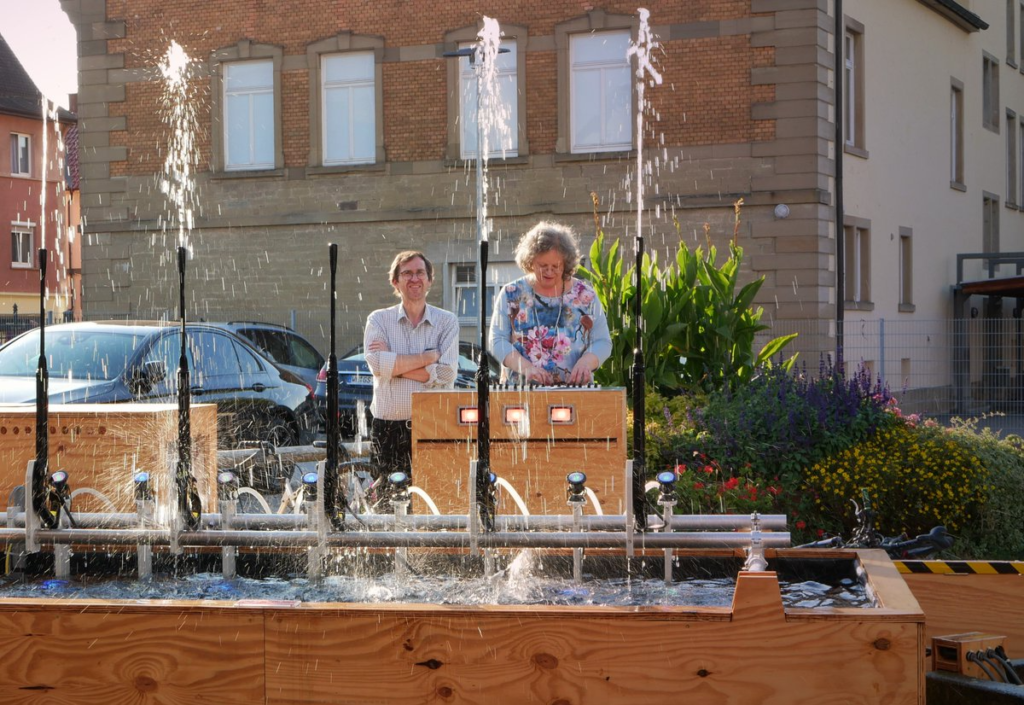 Earlier this year, artist Niklas Roy was invited to participate in the Drehmoment art festival that takes place in the south-west of Germany. The “catch” to this festival is that each artist was invited to team up with a local company to take advantage of their products and resources. Of these was cleaning equipment brand Kärcher, known for their pressure washers.

With this company’s backing, Roy put together a musical water fountain powered by eight pressure washers, dubbing it the “Wasserorgel von Winnenden,” or “Water Organ of Winnenden”—the location of Kärcher’s headquarters. 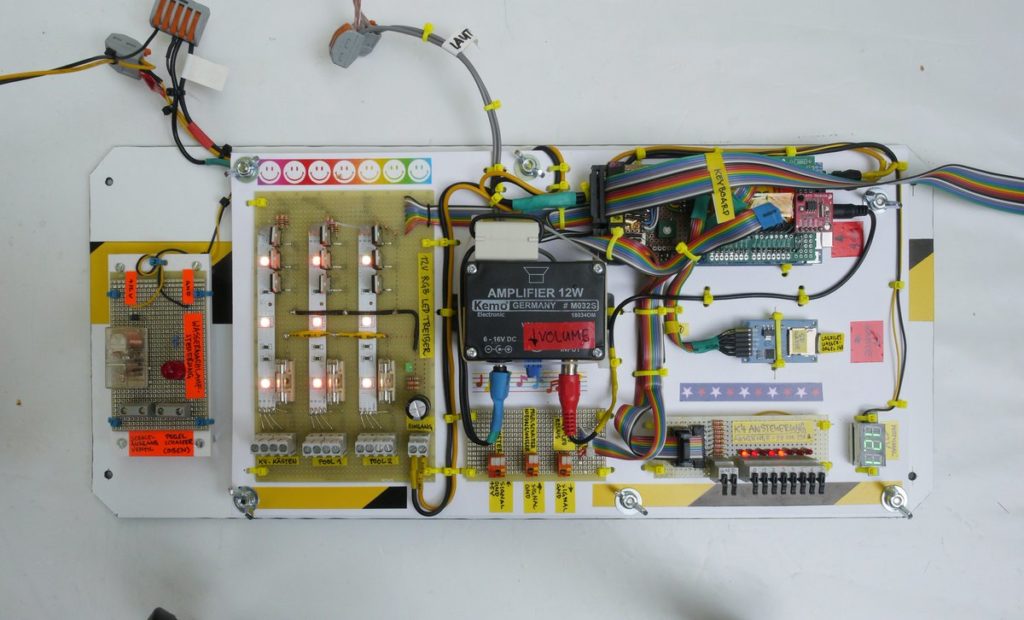 The installation is controlled by an Arduino Mega, along with supporting electronics including a Music Maker Shield and solid state relays to activate the pressure washers. During the festival, passerby were invited play some tunes using a 3D-printed keyboard made to withstand the elements and less-than-gentle interactions.

The brain of the Wasserorgel was an Arduino MEGA 2560, stacked with an Adafruit Music Maker Shield. The MIDI synthesizer of the shield generated the instrument sounds based on the input coming from a self-built, 3D-printed keyboard. The keyboard was designed solid enough to withstand weather and the misguided enthusiasm of drunk people at 3 ‘o clock at night. The program on the Arduino translated the keystrokes into water and light effects by switching 12V RGB LEDs via darlington transistors and the eight pressure sprayers via solid state relays. Five of the pressure sprayer fountains were installed on top of the main basin, one was installed on top of an existing fountain and two were installed on the roof of the Kronenplatz-building.

You can find more information in Roy’s project write-up, and see it in action below! 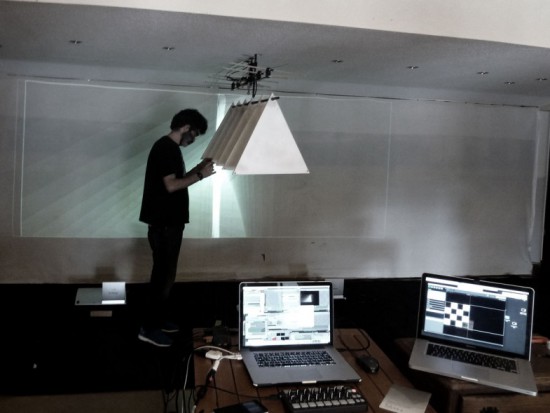 Interactive kinetic installations are always incredible to see in action, but they become even more awesome when they’re part of a performance. As in the case of Infinite Delta, which is the result of Boris Chimp 504 + Alma D’ Arame’s artistic residency at Montemor-o-Novo in Portugal.

Using Arduino boards, they built a physical structure comprised of triangular planes that swing back and forth like a pendulum, controlled by a series of servo motors. Light is projected onto the moving structures, creating patterns that are then reflected onto a nearby wall. Infinite Delta also modifies its shape in response to the movement and sound of the audience.

In Euclidean geometry any three points, when non-collinear, form a unique triangle and determine a unique plane. Nevertheless, in quantum physics the string theory proposes that fundamental particles may also have similarities with a string. It also states that the universe is infinite and in it all matter is contained. In this “multiverse”, our universe would be just one of many parallel existent universes. What would happen then if we multiply triangles infinitely? Could or would we have access to those parallel universes?

The performers augmented the physical world by overlaying it into the digital world to produce a new alternative, magic and hyper-sensorial landscape.

A custom-made interactive condo for your entertainment For those living in a high-rise, have you ever wondered what was going on behind the closed blinds of your neighbor’s home directly across from you?

Caretaker is a concept project that explores just that. It consists of a custom-made switch board with which you can control the lights of the flats opposite of yours, providing active entertainment that stimulates your senses better than passive media consumption.

If you want one of your own, simply take a picture of the building that you see from your window and Caretaker will design a laser-cut scale model of it for your use. The prototype runs on an Arduino and is battery-powered, allowing you to freely move it around.

The project is the work of Moholy-Nagy University of Art and Design Budapest (MOME) student, Máté Varga, in collaboration with Barbara Sterk, Miklos Erhardt, Adam Polhodzik, and FabLab Budapest.

You can see it in action below!

A custom-made interactive condo for your entertainment 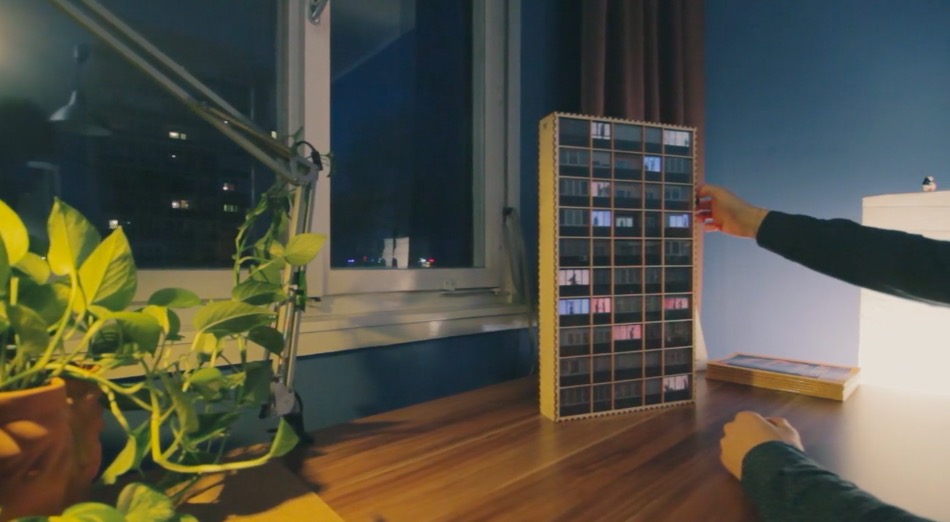 For those living in a high-rise, have you ever wondered what was going on behind the closed blinds of your neighbor’s home directly across from you?

Caretaker is a concept project that explores just that. It consists of a custom-made switch board with which you can control the lights of the flats opposite of yours, providing active entertainment that stimulates your senses better than passive media consumption.

If you want one of your own, simply take a picture of the building that you see from your window and Caretaker will design a laser-cut scale model of it for your use. The prototype runs on an Arduino and is battery-powered, allowing you to freely move it around.

The project is the work of Moholy-Nagy University of Art and Design Budapest (MOME) student, Máté Varga, in collaboration with Barbara Sterk, Miklos Erhardt, Adam Polhodzik, and FabLab Budapest.

You can see it in action below!

Learning Photosynthesis with an Interactive installation 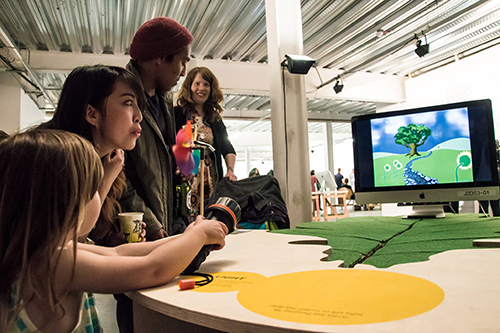 Photosynthesis is an interactive installation for primary school children created, designed and developed by Moritz von Burkersroda and exhibited at P3 Ambika, University of Westminster.

It’s a  learning  experience to understand the abstract process of photosynthesis in a hands-on way.  Thanks to a physical interaction  kids can easily understand what  plants convert light into chemical energy to fuel their activities.

The installation uses an Arduino to measure data from a photoresistor and a hacked Wii-remote to connect the objects with the video feedback on the screen triggered by a Processing sketch. On the page of the project you can download a Design Research Document about Contextual study theory to understand the relationship between interactivity, learning and educational institutions, like museums. 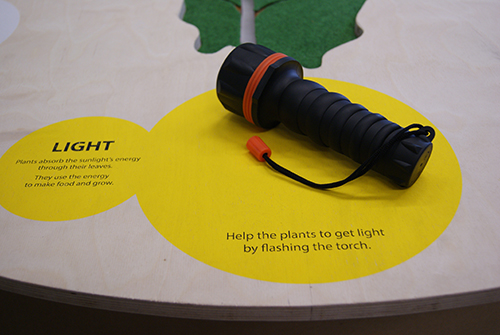 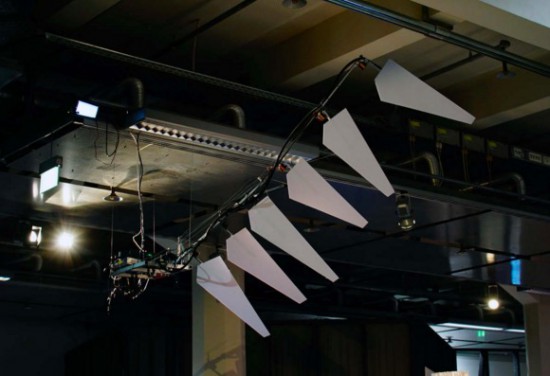 Wing is an interactive installation created by Dmitry Morozov  and commissioned by the Center for Art and Media (ZKM) in Karlsruhe, special for GLOBALE: Exo-Evolution exhibition, 2015. It’s a 2,5-meter wing that can be flapped by visitors thanks to compact dermal myLeaographic sensors (sensors measuring the electrical potential of muscles) installed  behind their ears and connected to an Arduino Uno:

The main idea of the project is an ironical and at the same time serious research on the topic of development of new instruments and prostheses as “extensions” of human body and accordingly its possibilities and potentials, which are being revealed by new technologies. At the same time, it’s an attempt to stimulate people to perceive and train the body in a different way, expanding the limits of self-control and self-organisation in order to adapt to the new conditions. At the same time, just like many spiritual practices aiming at the elevation of human soul through deep relaxation and control over seemingly uncontrollable muscles, this project uses the metaphor of flying as a reward for the ability to direct your mind to solving of non-standard tasks. 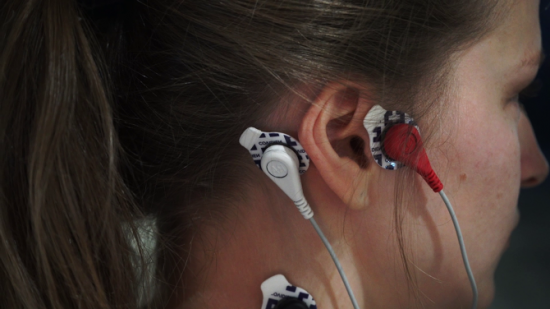 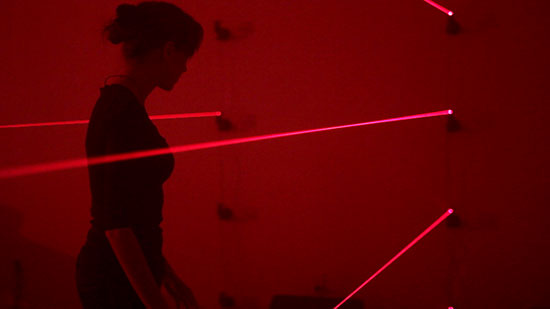 Toronto-based collaborative duo Hopkins Duffield created a gaming environment running on Arduino Mega in which the player battles a laser wielding A.I. security system gone awry. It’s like being in an action movie, walking in a pitch black room filled with the hollow sound of a machine breathing and a series of red laser fences slicing through the fog-filled air!

Laser Equipped Annihilation Protocol (The L.E.A.P. Engine) is a an installation that :

explores the personality of a snarky and mysterious game sentience who has infected a room with technological systems that challenge players and collect data. With a limited amount of time, the player must pass through a complicated series of changing and alternating laser patterns without tripping any of the lasers in order to deactivate the system and win the game. If the player trips a laser or if the timer runs out, it’s game over.

Take a look at the video to discover how they made it: 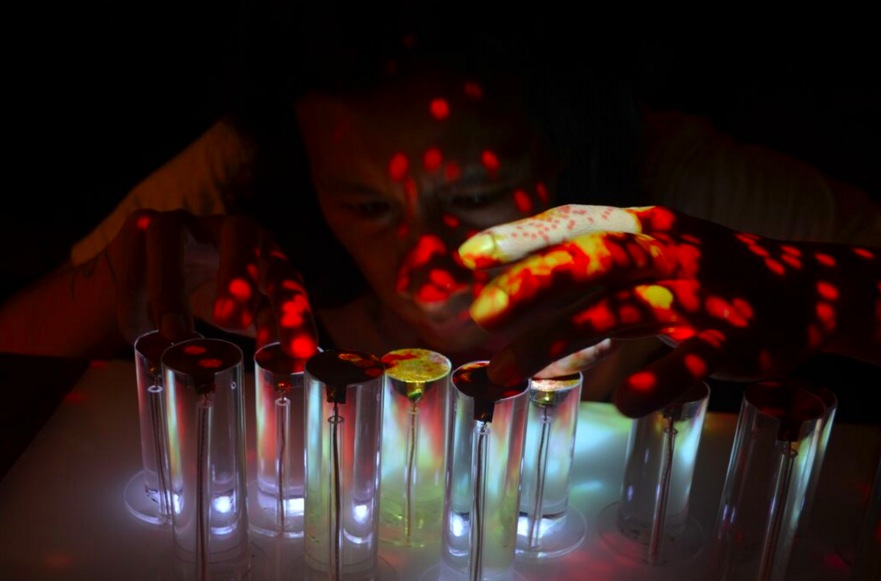 Originally from Guatemala, Balam Soto is an artist and maker of software and hardware creating interactive art installations and public artworks that fuse low tech with high tech. He recently shared with us a project called Exp.Inst.Rain and running on Arduino Uno:

” Exp.Inst.Rain” is an interactive installation and experimental instrument that incorporates projection and sound generated by a wireless box made of wood, plexiglas, Arduino, electronic components and custom touch sensors. By touching the box at various points, participants create different sounds; these sounds then generate changes in the projection.

It is an analysis of the social and cultural adoption of tangible user interface. Globally, touch devices are increasingly common; people understand how to use them. “Exp.Inst.Rain” analyses this new technology and makes use of this new common understanding to fuse sound and visuals into realtime interactivity.

This artworks it’s power by Arduino and wireless vibes , using Capacitive Touch Sensor and home made aluminum electrode to pick up touch. Custom software acts as a Bridge between the Exp.inst.X and Midi software. 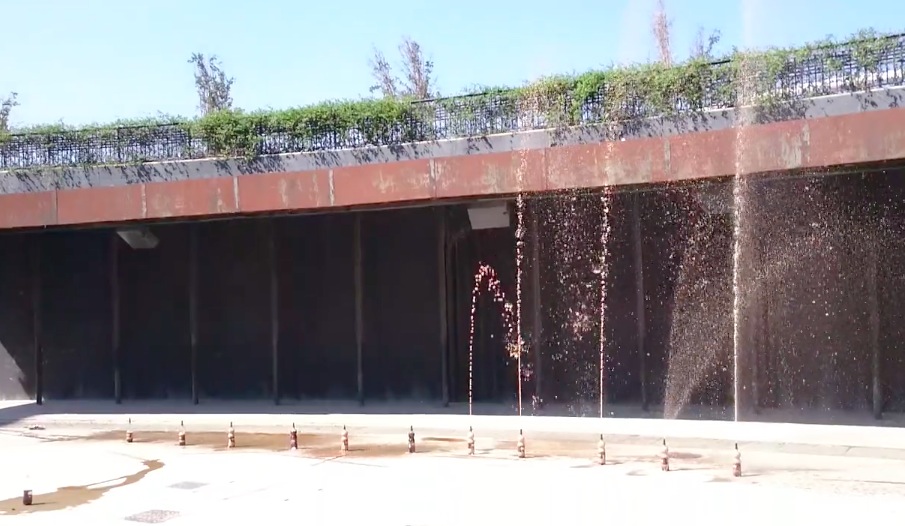 What happens in Zaragoza when you mix David Cuartielles, a group of teens, an Arduino Yún, 12 cokes and a bunch of mentos?

Every word is like an unnecessary stain on silence « Every word is like an unnecessary stain on silence and nothingness » is a sentence from Samuel Beckett but also the title of Eugenio Ampudia’s last artwork created and installed with the support of Ultra-lab  and running on Arduino Mega and GSM Shield:

The exhibition room has in its center a rectangular mirror made of water that reflects the room and the visitors. The perfect still water, metaphor of silence, is broken by the irruption of sporadic waves. These movements, the stain on silence, are provoked by the visitors’ interactions. In the heart of the water tank, a dispositive is able to receive calls and to open a valve. To each visitor’s call, so a series of movements is generated and break the calm.

Ultra-lab realized the technical part of the artwork thanks to an Arduino Mega, the Arduino GSM shield and various valves open and close by the Arduino Mega when a call is received by the shield. The dispositive is particularly interesting for its adaptation in a water context and for connecting valves.

Thanks to it, the artwork succeed to express beautifully the paradox between a destructive attraction for words and communication to which it’s hard to resist in order to prefer a finally inaccessible contemplation.

The work can be visited in the exhibition room Abierto X Obras in in the Spanish art center Matadero Madrid until the 17th of May 2015 and below you can watch a video interview with the artist: