Big parties need a conversation piece, and what’s better than a drink-making robot? Not only is it a good conversation starter, it also frees up the party host who would normally be the bartender. It turned out that the drink robot was a really good idea. The Mai Tai recipe presented here […]

The post Build a Simple Cocktail Drinkbot with Arduino appeared first on Make: DIY Projects and Ideas for Makers.

HardWino Takes The Effort Out of Happy Hour

A personal bartender is hard to come by these days. What has the world come to when a maker has to build their own? [Pierre Charlier] can lend you a helping hand vis-à-vis with HardWino, an open-source cocktail maker.

The auto-bar is housed on a six-slot, rotating beverage holder, controlled by an Arduino Mega and accepts drink orders via a TFT screen. Stepper motors and L298 driver boards are supported on 3D printed parts and powered by a standard 12V DC jack. Assembling HardWino is a little involved, so [Charlier]  has provided a thorough step-by-step process in the video after the break.

[Charlier] has also kindly included his Arduino code to further facilitate your happy hour. The best part? This is isn’t even the final product; and yet — this functional prototype can already turn the tables on a long day. Whatever your beverage of choice, make sure it stays as hot or cool as you want with the help of this handy coaster. 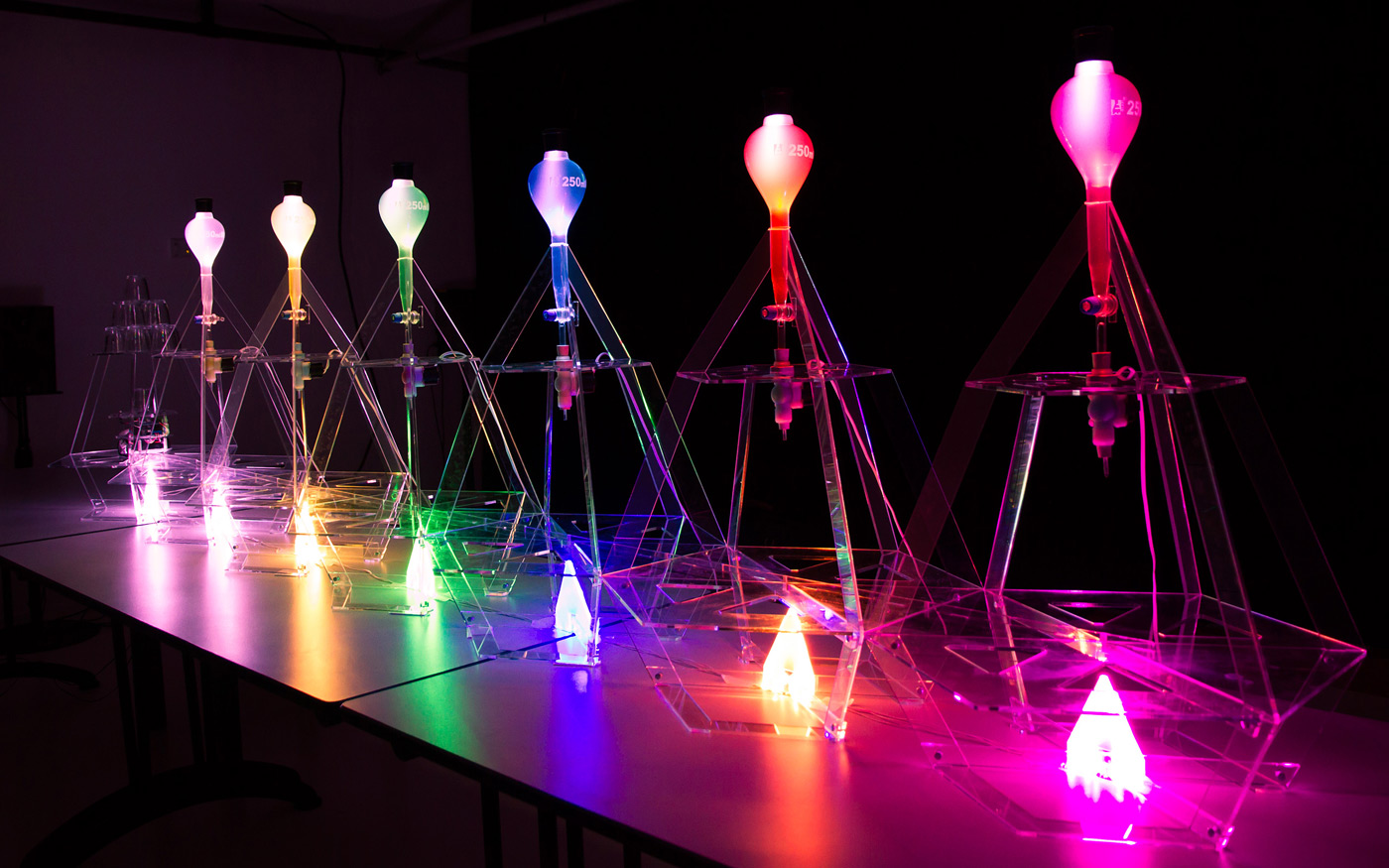 Ever wondered what your tweets would taste like if you could distill them into a drink? Probably not, but there's now a way to find out. Clément Gault and Koi Koi Design have whipped up Data Cocktail, an Arduino-powered machine that creates a drink based on Twitter updates. In its current incarnation, it looks for the five latest tweets mentioning keywords linked to ingredients, and fills the glass accordingly. The result is an original, spur-of-the-moment mix -- it'll even print out the 'recipe' (really, a ratio of the keywords) and thank the users who unwittingly contributed to the beverage.

Via: The Creators Project

Ever wondered what your tweets would taste like if you could distill them into a drink? Probably not, but there's now a way to find out. Clément Gault and Koi Koi Design have whipped up Data Cocktail, an Arduino-powered machine that creates a drink based on Twitter updates. In its current incarnation, it looks for the five latest tweets mentioning keywords linked to ingredients, and fills the glass accordingly. The result is an original, spur-of-the-moment mix -- it'll even print out the 'recipe' (really, a ratio of the keywords) and thank the users who unwittingly contributed to the beverage.

Via: The Creators Project

There Is No Spoon; Automatic Self Stirring Mug

Sometimes it’s helpful to realize the truth that there is no spoon. At least, not with [Ronaldo]’s automatic self-stirring mug. At first it was just a small propeller in the bottom of the mug that turned on by pushing a button in the handle, but this wasn’t as feature-rich as [Ronaldo] hoped it could be, so he decided to see just how deep the automatic beverage-mixing rabbit hole goes.

The first thing to do was to get a microcontroller installed to handle the operation of the motor. The ATtiny13a was perfect for the job since it’s only using one output pin to control the motor, and can be configured to only draw 0.5 microamps in power-saving mode. This ensures a long life for the two AAA batteries that power the microcontroller and the motor.

As far as operation goes, the motor operates in different modes depending on how many times the button in the handle is pushed. It can be on continuously or it can operate at pre-determined intervals for a certain amount of time, making sure to keep the beverage thoroughly mixed for as long as the power lasts. Be sure to check out the video below for a detailed explanation of all of the operating modes. We could certainly see some other possible uses for more interesting beverages as well.

After five weekends of work, [Alex] completed his automatic drink maker, the RumBot. What makes this automated bartender different from others is the fact that it is fast. VERY fast. It can serve drinks to five different locations in as little as 3 seconds per drink. By [Alex]‘s estimation, this could keep a party of 100 people going without anyone waiting on a drink.

The RumBot can make either of five pre-programmed drinks at varying levels of alcoholic intensity, ranging from 1 (“Virgin”) to 10. And for that extra push over the cliff, you can turn the knob to 11 (“Problem”).

Drink selection itself is handled by a simple digital I/O on an Arduino with a 1950s-styled user interface. The frame is built out of wood and uses 3D Printed plastic parts. It houses a very robust servo on a belt stage to move the drink nozzle, and special sensors placed at either of the five drink locations detect a cup ready to be filled. Any cup placed at any of the positions will automatically be filled based on the RumBot’s settings at any particular time.

Based on the quality of the build and the increased speed of this automatic drink maker, this should be a huge hit at any party. With all the knobs turned to 11 though, it might be a good idea to have a breathalyzer on hand! All of the code and schematics for the project are available at the project site as well.

Build your own robotic bartender with Arduino and a 3D printer 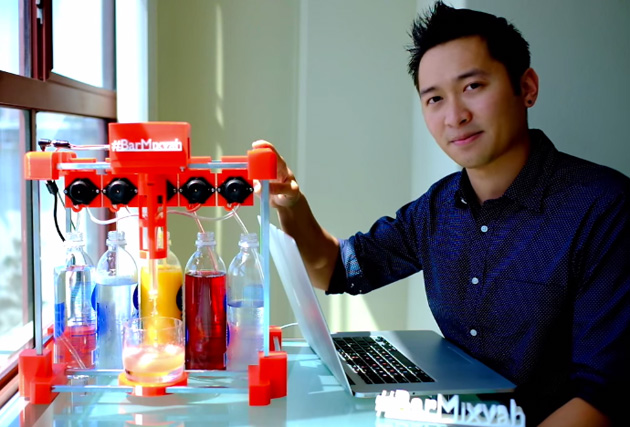 You can certainly buy a ready-made drink mixing robot if you're flush with cash, but wouldn't you rather spend that money on the drinks themselves? Yu Jiang Tham thinks so -- he recently designed Bar Mixvah, a robotic bartender you can build yourself with $180 in parts. The key ingredient is an Arduino Nano microcontroller that takes your requests through a web-based interface. After that, it's mostly a matter of 3D printing the frame and wiring up the pumps that will make your beverage a reality.

This time Arduino for drinks, always from Romania.

Do you know what you get if you combine Facebook, Twitter, Arduino, Raspberry PI and alcohol ? Well, you get the Social Drink Machine and a lot of really happy people at HowToWeb Bucharest.
The Social Drink Machine involves a fully enabled robotic bar which prepares your dream cocktail, a Facebook application which you use to order the drink and also a Twitter bot as an alternative ordering method.

In order to “drink with Facebook”, all you have to do is to scan the QR code displayed next to the machine with your mobile phone. It will get you to a Facebook application which enables you to choose the drink you want. Once you have decided what you want to drink, the application displays a large QR code on your mobile phone. You show this to the machine camera, and you will get your drink prepared. Actually, a robotic machine will prepare it for you. All you have to do is to place the glass, which is then moved back and forth until all of the ingredients have been mixed. And if you wanna brag about this, the application allows you to post on Facebook about the crush you just got on the cool robotic bartender.

[Robofun - Create] also made this.