Mod turns your graphing calculator into a selfie camera

Your graphing calculator may not be getting much use these days now that other mobile devices can do the job, but it still has a few tricks up its sleeve if you're willing to do some tinkering. Christopher Mitchell's latest project, ArTICam, lets you turn a TI-83 Plus or TI-84 Plus calculator into a selfie-oriented camera. The mod mostly requires a Game Boy Camera and a programmable Arduino board like the Uno. After a little bit of wiring and some (thankfully ready-made) code, you can snap self-portraits with a calculator command. The 128 x 123 grayscale pictures you take won't win photography awards, but that's not the point -- this is more about having fun with gadgets that might otherwise sit in the closet gathering dust. Hit the source link if you have the gear and want to give ArTICam a whirl. Last June Thomas Amberg participated to Water Hackathon – Open Source Technologies for Rivers, Oceans and Lakes taking place in Lausanne. He came up with a DIY solution made with Arduino Uno and a flow sensor to help monitor how much water a tub consumes.

The Augmented Water device helps you save water by turning red after one Liter and helping you not to waste it unnecessarily.
The ingredients you need to reach the results are the following: an Arduino Uno, Adafruit Neopixels, Flow sensor, LiPo battery, LiPo charger, jumper wires, tube fitting the sensor, plastic test tube and some zip ties. You can easily make one in 6 steps with his tutorial on Instructables. 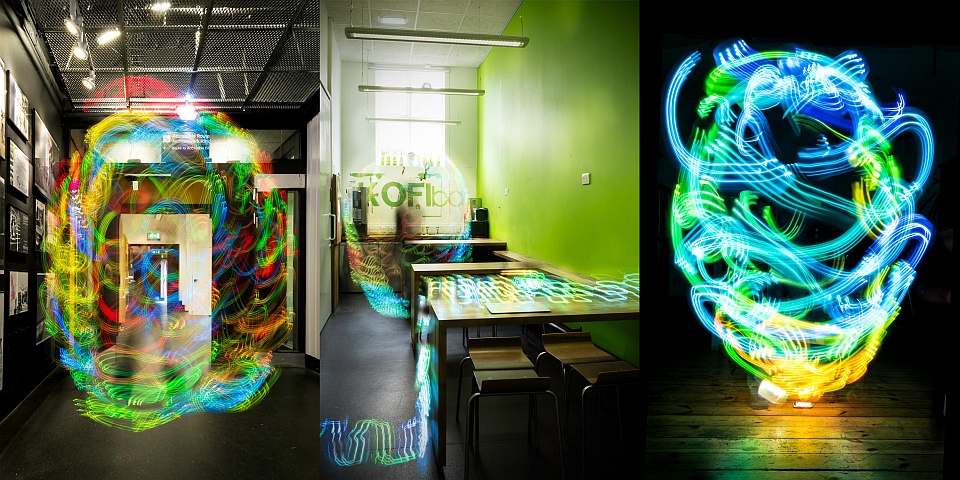 For most of us, the only way we can see the strength of a WiFi network is by the familiar signal icon on any given device. Newcastle University School of Architecture doctorate student Luis Hernan, however, has a different method: spirit photography. He's using the new age-y method of capturing someone's aura via electric coronal discharges -- a Kirlian Device -- with a few geeky augmentations (an Arduino Uno board and WiFi Shield, for example) to illustrate how strong a wireless broadcast is with colors. As Wired notes, these components take account of the nearby signal and convert it into color information that's then beamed onto an LED strip; red being the strongest and blue being weaker sections of the network. To create the pictures like what you see above and at the source, Hernan swung the home-made device around after setting up long-exposure shots with a camera. While we can't know for sure, we'd imagine that something with no signal would look a lot like this.

This Arduino hackaphone was never going to be pretty, but it does the job

Okay, we'll admit that it looks a bit like a baby monitor. But in contrast to those over-engineered pieces of parenting paraphernalia, this DIY cellphone can actually make calls and send texts over GPRS. More importantly, Hackaday claims it was put together by a lone hacker ("Victorzie") from an assortment of off-the-shelf and modded parts, including a TFT touchscreen, lithium ion battery, charging circuit, GPRS module and shield. These components were hooked up to an Arduino Uno microcontroller running a barebones UI and then jammed into a 3D printed case, which makes the device look far more pocketable than some previous hackaphone efforts. The end result inspires big respect for the creator, but also, more grudgingly, for the pro engineers at places like Nokia, who can pull all this stuff together and even get it FCC-approved for just a few dollars.

Homebrew 8-bit computer packs in 16 cores, multitasks like a champ

It looks like Jack Eisenmann has done it again. A couple of years after the hobbyist hacker built his first 8-bit computer, he's cobbled together yet another one, but this time with a whopping 16 cores. Appropriately dubbed the DUO Mega, the multicore wonder is made with 16 ATMega328p microcontrollers, each connected to an 8-bit data bus and designed to interpret a custom bytecode that runs the software. Compiled inside a nondescript plastic bin, the machine is also comprised of 16MHz crystal oscillators attached to each of the aforementioned cores, three Arduino UNO boards, 32kb of SRAM, 512kb of flash memory, eight breadboards, an Ethernet shield, a VGA out port and a multitude of components that combine to look like that mess of wires seen above. Because of all that processing power, this relatively primitive machine multitasks beautifully and can perform complicated calculations at an impressive clip. To get a demo of what this marvelous feat of DIY computing can do, have a peek at Eisenmann's video, complete with an 8-bit soundtrack, after the break.

On the whim of a coin flip, Nick Thatcher once decided between building a homemade Segway, or a self balancing unicycle. Even though the powers of fate chose the former, Thatcher's thirst to build wasn't quenched -- he built the one-wheeled scooter anyway. The Raptor looks a lot like a Ryno unicycle built from spare parts -- a chain driven wheelbarrow wheel powered by a 350w geared motor, a pair of batteries wired in series, some PVC and polycarbonate, an IMU gyro and an Arduino UNO -- all hobbled together to form a one-wheeled electric mount. Thatcher says the scooter can push 10mph safely, but faster speeds tend to outpace the gyro's corrective efforts. Still, the bike promises between 90-120 minutes of face-plant free fun, provided the rider is at least a little balanced. The motorized unicycle isn't for sale, but peek on over to Thatch Industries for a parts list, or scoot on past the break to see the bike in action.

It's great to see Ben Heck focus his efforts of do-gooder projects like that foot-controlled wheelchair, but we'll always have a soft spot for the modfather's more nostalgic undertakings, like this BASIC pocket computer. Heck created the device for the latest episode of his web show, and if you're following along at home, you'll need the Chatpad from an Xbox 360 controller, an Arduino Uno and a LCD display -- a Hitachi HD 44780, in this case. The modder-turned-host is quick to point out that the project's purpose isn't solely nostalgic -- you can also use it to control real world objects, which in the Heck's case means a ghost on a pinball playfield. Check out a video of the invention in action after the break.

Ben Heck fashions a pocket computer with an Xbox Chatpad and Arduino Uno originally appeared on Engadget on Mon, 10 Sep 2012 22:04:00 EST. Please see our terms for use of feeds.

Hobbyist Erik Kettenburg was concerned that the size and cost of Arduino stifled his ability to craft, so he set about developing Digispark. It's an Arduino-compatible board, the size of a quarter, that offers a few pins at around a third of the cost of an Uno -- so you don't have to worry about taking projects apart when you're done. Designed to be fully compatible with the Italian standard, it's packing six I/O pins, 8k memory and a full USB connection amongst other things. The aim is to retail the gear for $12 a piece, and has been so popular that it's made nearly $100,000 in Kickstarter pledges, smashing its original goal of $5,000. We've got video for you below, and you can still throw some cash Mr. Kettenburg's way if you fancy getting your hands on one quickly.

OLED Lego train station emerges from Adafruit and Arduino gear, minifigs to get home on time

Who knew Lego characters had to be somewhere in a hurry? Adafruit did, as it just whipped up a minifig-sized train schedule. The invention mates one of Adafruit's own 1-inch OLED boards with an Arduino Uno controlling the schedule behind the scenes. It looks to be a straightforward project for the DIY types, although the display is currently all show: the schedule doesn't (yet) pair up with the train tracks to automatically let your minifigs know if their trip to the pirate spaceship castle has been delayed by ghosts. You can check the source link for the full instructions. Duplo builders, alas, are kept out of the loop.

OLED Lego train station emerges from Adafruit and Arduino gear, minifigs to get home on time originally appeared on Engadget on Tue, 26 Jun 2012 00:07:00 EST. Please see our terms for use of feeds.

Ben Heck is always thinking up gadgets that make life easier, from completely hands-free luggage to a sensor system for improved cycling safety. His latest mod is meant for those of us who have burnt Ramen a few too many times. His so-called Ben-Stur Remote Control Android app works with a pot-stirring device, freeing users to stray from the kitchen while their meal is cooking. The app works via Bluetooth, and the pot-stirrer consists of an actuator arm, a chip clip, a timing belt and, of course, a wooden spoon. Heck used a Google ADK and an Arduino Uno for the control mechanism that communicates between the app and the stirrer. In the tablet app, users can check their food's temperature and control the speed of the the spoon's stirring. If that whets your appetite, click the source link for more info -- and check out our Maker Faire interview with Mr. Heckendorn himself.

Ben Heck's Android-controlled pot-stirrer does (most of) the cooking for you originally appeared on Engadget on Tue, 22 May 2012 05:54:00 EST. Please see our terms for use of feeds.