We are continuously inspired by our readers which is why we share what we love, and that inspiration flows both ways. [jetpilot305] connected a Rothult unit to the Arduino IDE in response to Ripping up a Rothult. Consider us flattered. There are several factors at play here. One, the Arduino banner covers a lot of programmable hardware, and it is a powerful tool in a hardware hacker’s belt. Two, someone saw a tool they wanted to control and made it happen. Three, it’s a piece of (minimal) security hardware, but who knows where that can scale. The secure is made accessible.

The Github upload instructions are illustrated, and you know we appreciate documentation. There are a couple of tables for the controller pins and header for your convenience. You will be compiling your sketch in Arduino’s IDE, but uploading through ST-Link across some wires you will have to solder. We are in advanced territory now, but keep this inspiration train going and drop us a tip to share something you make with this miniature deadbolt.

Locks and security are our bread and butter, so enjoy some physical key appreciation and digital lock love.

Transform an Ikea Side Table into a Music Visualizer 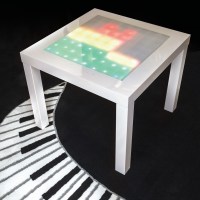 Use some LEDs to upgrade a $10 Ikea side table into a centerpiece that bumps and jives to the beat of your tunes. Get your freq on!

The post Transform an Ikea Side Table into a Music Visualizer appeared first on Make: DIY Projects and Ideas for Makers.

New Project: How to Build a Mission Control Desk 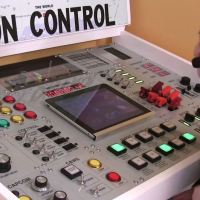 A kid's homework table lifts up to reveal a NASA-inspired mission control center. Follow along for help in building your own.

The post How to Build a Mission Control Desk appeared first on Make: DIY Projects, How-Tos, Electronics, Crafts and Ideas for Makers. Casa Jasmina and Arduino are proud to announce a collaboration with Opendesk at Atelier Clerici during Fuorisalone 2015.

Atelier Clerici will host an independent project curated by Space Caviar and Z33, with a daily program of exhibitions and activities aimed at questioning the future of design in relation to architecture, technology and global context of living.

Opendesk, the online platform for open and smart design, will join Atelier Clerici with ‘Open Making Platform’ a series of events exploring issues related to open source design as a global and, at the same time, local practice. The program of  ‘Open Making Platform’ will include an exhibition of smart open designs made by local Italian makers and two workshops: ‘Design for Open Making’ (Wed April 15th, 11.30 am – 1.30 pm)and ‘Smart Furniture’ (Fri April 17th, 2 – 5.30 PM), in collaboration with Arduino.

Arduino and Casa Jasmina invite you to take part to the meetup and informal workshop focusing on the integration of open source connected technologies into everyday objects. Friday’s event will include a presentation by Bruce Sterling about the Casa Jasmina project.

Register for the event here.

An ordinary IKEA table becomes the center of attention when it's turned into a music visualizer!

End Table Kegerator Hides the Tap when You’re Not Looking

What’s better than an ordinary end table? How about an end table that can serve you beer? [Sam] had this exact idea and used his skills to make it a reality. The first step of the build was to acquire an end table that was big enough to hold all of the components for a functional kegerator. This proved to be a bit tricky, but [Sam] got lucky and scored a proper end table from a garage sale for only $5.00.

Next, [Sam] used bathroom sealant to seal up all of the cracks in the end table. This step is important to keep the inside cold. Good insulation will keep the beer colder, while using less electricity. Next, a hole was cut into the top of the table for the draft tower.

The draft tower is mounted to a couple of drawer slides. This allows the tower to raise up and down, keeping it out of sight when you don’t want it. The tower raises and lowers using a simple pulley system. A thin, high strength rope is attached to the tower. The other end is attached to a spool and a small motor. The motor can wind or unwind the spool in order to raise and lower the tower.

The table houses an Arduino, which controls the motor via a homemade H bridge. The Arduino is hooked up to a temperature sensor and a small LCD screen. This way, the users can see how cold their beer will be before they drink it.

To actually keep the beer cold, [Sam] ripped apart a mini fridge. He moved the compressor and condenser coils to the new table. He had to bend the coils to fit, taking care not to kink them. Finally he threw in the small keg, co2 tank and regulator. The final product is a livingroom gem that provides beer on demand.

Demo video (which is going the wrong way) can be found after the break.

Could your humble abode use a little microcontrolled LED pizzaz? Why not class up the joint with a stunning arduino-controlled chandelier made from jars using this brilliant tutorial?

After picking up a vintage Delta Homecraft wood lathe from a garage sale, Chris decided to convert to CNC using an Arduino:

I found an old lathe at a garage sale and decided to turn it into a router lathe for cutting spirals, flutes and threads. Initially, I considered using a strictly mechanical mechanism to synchronize spindle rotation and cross-feed travel, but after playing with an Arduino and some stepper motors, I realized that could be a better solution, possibly even converted to a full CNC system sometime in the future. Now that I know it’s going to work, (I made the first cut today) I’m sharing some notes on the build.

I love the detail Chris put into documenting this conversion. He even explains how he prototyped the design using an Arduino, a MotorShield, and some old stepper motors to make sure everything would work on his full-sized version. Check out the entire build on Chris’s Blog. [Thanks Rob!]

A few years back I made a motion sensitive night light as a Mother’s day gift and while it worked pretty well it really chewed out the batteries. And as with all devices that eat batteries it eventually fell out of use. The standby current was around 4 mA due to the common LM324 opamp that was used to amplify the PIR motion sensor signal. The original enclosure was CNC milled from a bit of re-purposed apple which had a former life as a guitar body I built as a child.

Code and schematics on the project page.