We are continuously inspired by our readers which is why we share what we love, and that inspiration flows both ways. [jetpilot305] connected a Rothult unit to the Arduino IDE in response to Ripping up a Rothult. Consider us flattered. There are several factors at play here. One, the Arduino banner covers a lot of programmable hardware, and it is a powerful tool in a hardware hacker’s belt. Two, someone saw a tool they wanted to control and made it happen. Three, it’s a piece of (minimal) security hardware, but who knows where that can scale. The secure is made accessible.

The Github upload instructions are illustrated, and you know we appreciate documentation. There are a couple of tables for the controller pins and header for your convenience. You will be compiling your sketch in Arduino’s IDE, but uploading through ST-Link across some wires you will have to solder. We are in advanced territory now, but keep this inspiration train going and drop us a tip to share something you make with this miniature deadbolt.

Locks and security are our bread and butter, so enjoy some physical key appreciation and digital lock love.

When [gdarchen] wanted to read some NFC tags, he went through several iterations. First, he tried an Electron application, and then a client-server architecture. But his final iteration was to make a standalone reader with an Arduino and use WebUSB to connect to the application on the PC.

This sounds easy, but there were quite a few tricks required to make it work. He had to hack the board to get the NFC reader’s interrupt connected correctly because he was using a Leonardo board. But the biggest problem was enabling WebUSB support. There’s a library, but you have to change over your Arduino to use USB 2.1. It turns out that’s not hard, but there’s a caveat: Once you make this change you will need the WebUSB library in all your programs or Windows will refuse to recognize the Arduino and you won’t be able to easily reprogram it.

Once you fix those things, the rest is pretty easy. The PC side uses node.js. If you back up a level in the GitHub repository, you can see the earlier non-Arduino versions of the code, as well.

If you want to understand all the logic that went into the design, the author also included a slide show that discusses the three versions and their pros and cons. He did mention that he wanted a short-range solution so barcodes and QR codes were out. He also decided against RFID but didn’t really say why.

NFC business cards are a thing. You can also use them to catch some public transportation.

Use Your Smartphone as Your Car Key with an NFC Lock 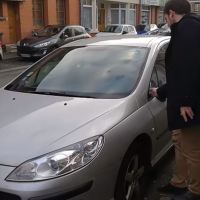 Adding an NFC unlocker to your car allows you to open your vehicle with your phone, or an NFC ring.

The post Use Your Smartphone as Your Car Key with an NFC Lock appeared first on Make: DIY Projects and Ideas for Makers.

Lots of people get a pet and then hack solutions that help them care for their new friend, like an automatic door to provide access to the great outdoors. Then again, some people build the pet door first and then build the pets to test it.

It’s actually not quite as weird as it sounds. [Amir Avni] and his wife attended a recent GeekCon and entered the GeekCon Pets event. GeekCon is a cooperative rather than competitive hackathon that encourages useless builds as a means to foster community and to just have some fun. [Amir] and his wife wanted to build a full-featured automatic pet door, and succeeded – with NFC and an ESP8266, the stepper-powered door worked exactly as planned. But without any actual animal companions to test the system, they had to hack up a few volunteers. They came up with a 3D-printed dog and cat perched atop wireless cars, and with NFC tags dangling from their collars, the door was able to differentiate between the wandering ersatz animals. The video below the break shows the adorable plastic pals in action.

It’s clear from all the pet doors and automatic waterers and feeders we’ve seen that hackers love their pets, but we’re pretty sure this is the first time the pet itself was replaced by a robot. That’s fine for the test environment, but we’d recommend the real thing for production.

This Car Lets You Fistbump to Unlock

In the dark ages, you had to use a key to lock and unlock your car doors. Just about every car now has a remote control on the key that lets you unlock or lock with the push of a button. But many modern cars don’t even need that. They sense the key on your person and usually use a button to do the lock or unlock function. That button does nothing if the key isn’t nearby.

[Pierre Charlier] wanted that easy locking and unlocking, so he refitted his car with a Keyduino to allow entry with an NFC ring. What results is a very cool fistbump which convinces your car to unlock the door.

Keyduinio is [Pierre’s] NFC-enabled project, but you can also use a more conventional Arduino with an NFC and relay shield. The demo also works with a smartphone if you’re not one for wearing an NFC ring. Going this round, he even shows how to make it work with Bluetooth Low Energy (BLE).

In the video below, you can see how he removed the car’s internal lock switch and modified the wire harness to take the connection to the Arduino. He’s also included all the code. About the only tricky part is doing the actual wiring in your car and finding a suitable source of power. That varies from car to car, so it isn’t easy to give specific instructions.

Opening doors of one kind or another is a popular project theme. While [Pierre’s] project might open the door on a coupe, we’ve seen another project that works on a coop.

A DIY Jukebox made with Arduino and NFC Shield 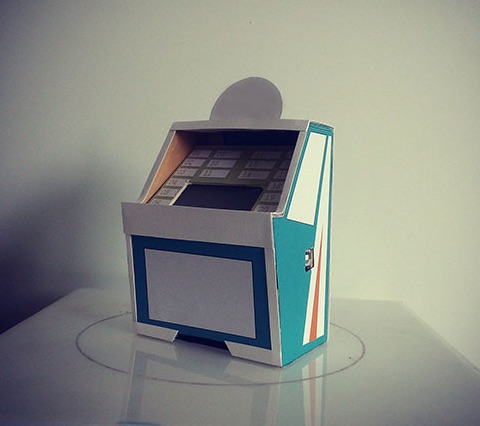 DIY Jukebox is a project made by Mario Pucci to show how Arduino Uno, NFC Shield and Python can be used to build a real jukebox. NFC means Near Field Communication and the NFC shield can perceive objects attached to little chips called NFC tags containing specific messages. In this project, Marco programmed each chip to play a different music genre when the tag is inserted in the cardboard jukebox:

You can download the file of the cardboard Jukebox at this link and the sketches here.

The steps of the tutorial are in italian but you can use google translate if needed! Enjoy the sound of music 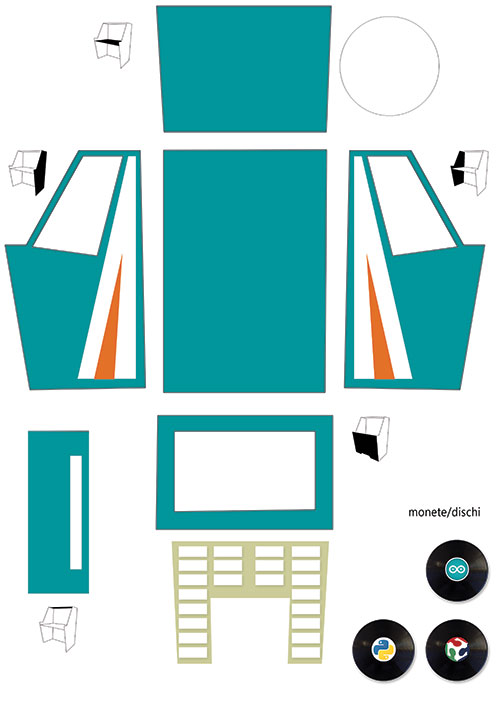 New Project: Make a Custom NFC Unlocker for Your Computer Are incorrect passwords driving you insane? Do you tire of constantly having to type in your 20 character password? In this project we use an Adafruit NFC shield to detect an NFC tag and an Arduino Leonardo to unencrypt the NFC tag and type in your password. This project requires […]

The post Make a Custom NFC Unlocker for Your Computer appeared first on Make:.

New Project: Make a Custom NFC Unlocker for Your Computer

Are incorrect passwords driving you insane? Do you tire of constantly having to type in your 20 character password? In this project we use an Adafruit NFC shield to detect an NFC tag and an Arduino Leonardo to unencrypt the NFC tag and type in your password. This project requires […]

The post Make a Custom NFC Unlocker for Your Computer appeared first on Make:.

[Sigurd] manage to obtain an old vending machine from his dorm. The only problem was that the micocontroller on the main board was broken. He and his friend decided they could most likely get the machine back into working order, but they also knew they could probably give it a few upgrades.

This system uses two Arduino Pro Minis and an Electric Imp to cram in all of the new features. One Arduino is connected to the machine’s original main board. The Arduino interfaces with some of the shift registers, relays, and voltage regulators. This microcontroller also lights up the buttons on the machine as long as that particular beverage is not empty. It controls the seven segment LED display, as well as reading the coin validator.

The team had to reverse engineer the original coin validator in order to figure out how the machine detected and counted the coins. Once they figured out how to read the state of the coins, they also built a custom driver board to drive the solenoids.

A second Arduino is used to read NFC and RFID cards using a Mifare RC522 reader. The system uses its own credit system, so a user can be issued a card with a certain amount of pre-paid credit. It will then deduct credit appropriately once a beverage is vended. The two Arduinos communicate via Serial.

The team also wanted this machine to have the ability to communicate with the outside world. In this case, that meant sending cheeky tweets. They originally used a Raspberry Pi for this, but found that the SD card kept getting corrupted. They eventually switched to an Electric Imp, which worked well. The Arduino sends a status update to the Imp every minute. If the status changes, for example if a beverage was dispensed, then the Imp will send a tweet to let the world know. It will also send a tweet to the maintenance person if there is a jam or if a particular slot becomes empty.

[Nairod785] wanted to build a lock box that would lock from the inside. He started with an inexpensive, plain wooden box. This kept the cost down but would also allow him to easily decorate the box later on using a wood burning tool.

To keep the box locked, he installed a simple latch on the inside. The latch is connected to a servo with string. When the servo rotates in one direction, it pulls the string and releases the latch. When the servo is rotated in the opposite direction, the latch closes and locks the box once again.

If you are going to have a locked box, then you are also going to need a key to open it. [Nairod785] used a ring with a built-in NFC tag, similar to the ring featured back in March. Inside of the box is a PN532 NFC module. The walls of the box were a little too thick for the reader to detect the ring, so [Nairod785] had to scratch the wall thickness down a bit. The NFC module is connected to an Arduino Nano. Communications are handled with I2C.

The NFC ring actually has two different NFC tags in it; one on each side. [Nairod785] had to program both of the tag ID’s into the Arduino to ensure that the ring would work no matter the orientation.

The system is powered by a small rechargeable 5V battery. [Nairod785] wired up a USB plug flush with the box wall so he can easily charge up the battery while the box is locked. It also allows him to reprogram the Arduino if he feels so inclined. There is also a power switch on the side to conserve energy.