This Telepresence Robot from the 1800s Helps Promote Metal Shop 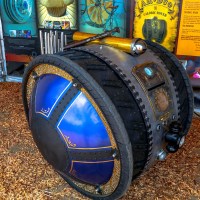 AR-Duo is a steampunk telepresence robot that shows off the skills and ingenuity of a school's metal shop.

The post This Telepresence Robot from the 1800s Helps Promote Metal Shop appeared first on Make: DIY Projects and Ideas for Makers.

On Your Phone While Driving an Electric Skateboard

Skateboards are fun, but you have to do all that pesky kicking in order to get anywhere. That’s why [Nick] decided to build his own electric skateboard. Not only is the skateboard powered with an electric motor, but the whole thing can be controlled from a smart phone.

[Nick] started out with a long board deck that he had made years ago. After cleaning it up and re-finishing it, the board was ready for some wheels. [Nick] used a kit he found online that came with the trucks, wheels, and a belt. The trucks have a motor mount welded in place already. [Nick] used a Turnigy SK3 192KV electric motor to drive the wheels. He also used a Turnigy electronic speed controller to make sure he could vary the speed of the board while riding.

Next [Nick] needed some interface between a smart phone and the motor controller. He chose to use an Arduino Nano hooked up to a Bluetooth module. The Nano was able to directly drive the motor controller, and the Bluetooth module made it easy to sync up to a mobile phone. The Android app was written using MIT’s App Inventor software. It allows for basic control over the motor speed so you can cruise in style. Check out the video below for a slide show and some demonstration clips.

It’s a popular project, and eerily similar to the one we saw a couple months back.

Want to learn Arduino? Use this educational Microbot!

Introducing the latest creation from B.O.T, the SWARMµBOT. An Arduino-Compatible educational micro-bot with all sensors required for applications such as Line-Following, Maze Solving, And Swarming! With a Atmega328 running an Arduino-compatible bootloader, and an integrated USB-UART bridge, programming this bot is as easy as connecting a USB cable, and hitting upload.

Drawing on the popularity of the Tiny Tank, I decided that some folks might want wheels instead. I give you, Little Wheels.

The Little Wheels Robot is a great little bot for beginners and experienced robot builders alike. Simple, well designed and cute as a button, it is just a gosh darn good little bot.

Solarbotics has been sharing electronics, kits, and BEAM Robotics with the Geek community for over 17 years. We're based in Canada and send packages around the world every day, with free shipping in North America for orders over $99. Designing an Arduino-based mobile solar-powered data logging cat collar? We can help!