You can make your own rotary cellphone 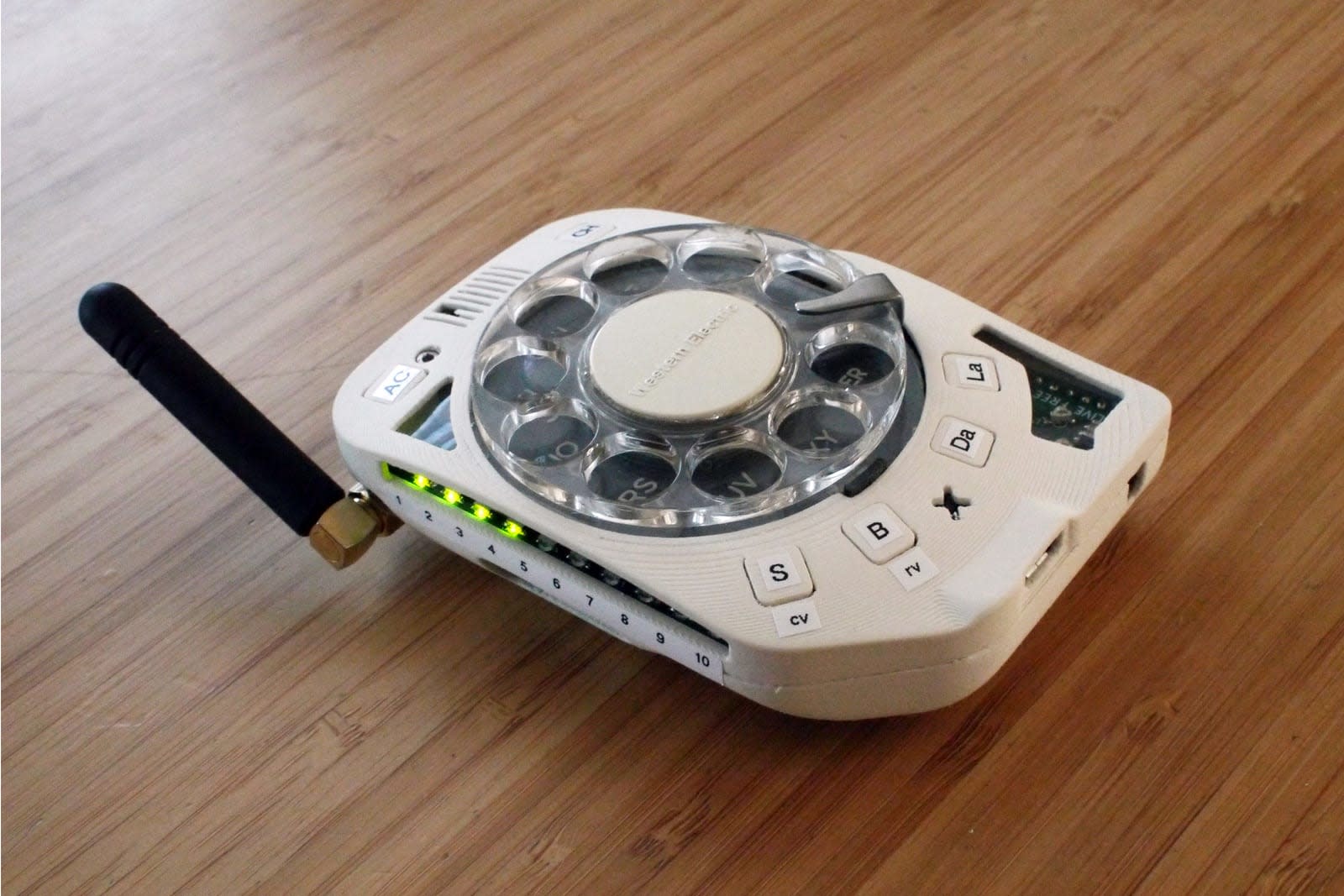 As convenient as modern cellphones are, there's a certain charm to spinning an old-fashioned rotary dial to make a call -- and now, there's a cellphone that caters to that nostalgia. Brookhaven National Lab engineer Justine Haupt has developed a rotary cellphone that's not only functional, but available to make with the help of a $240 do-it-yourself kit. It's effectively a throwback to the days when phones were for calling and nothing else, plus a few present-day creature comforts.

You can make your own rotary cellphone 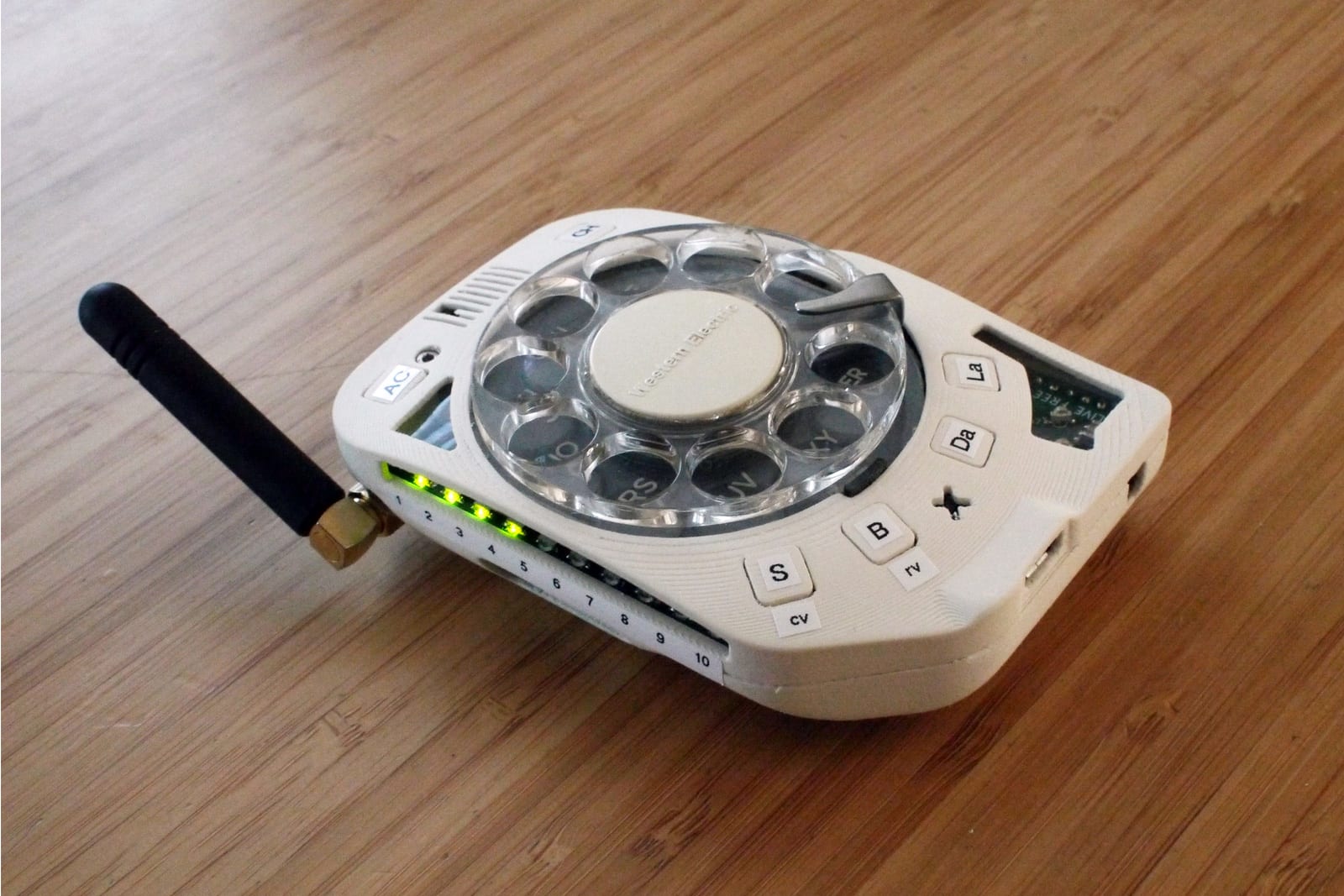 As convenient as modern cellphones are, there's a certain charm to spinning an old-fashioned rotary dial to make a call -- and now, there's a cellphone that caters to that nostalgia. Brookhaven National Lab engineer Justine Haupt has developed a rotary cellphone that's not only functional, but available to make with the help of a $240 do-it-yourself kit. It's effectively a throwback to the days when phones were for calling and nothing else, plus a few present-day creature comforts.

Imagine for a moment that you’ve been tasked with developing a device for interfacing with a global network of interconnected devices. Would you purposely design a spring-loaded dial that can do nothing but switch a single set of contacts on and off from 1 to 10 times? What kind of crazy world would we have to live in where something like that was the pinnacle of technology?

Obviously, such a world once existed, and now that we’ve rolled the calendar ahead a half-century or so, both our networks and our interfaces have gotten more complex, if arguably better. But [Jan Derogee] thinks a step backward is on order, and so he built this rotary phone web browser. The idea is simple: pick up the handset and dial the IP address of the server you want to connect to. DNS? Bah, who needs it?

Of course there is the teensy issue that most websites can’t be directly accessed via IP address anymore, but fear not – [Jan] has an incredibly obfuscated solution to that. It relies on the fact that many numbers sound like common phrases when sounded out in Chinese, so there end up being a lot of websites that have number-based URLs. He provides an example using the number 517, which sounds a bit like “I want to eat,” to access the Chinese website of McDonald’s. How the number seven sounding like both “eat” and “wife” is resolved is left as an exercise to the reader.

And here we thought [Jan]’s rotary number pad was of questionable value. Still, we appreciate this build, and putting old phones back into service in any capacity is always appreciated.

Add Intuitiveness to OpenSCAD With Encoders

The first time I saw 3D modeling and 3D printing used practically was at a hack day event. We printed simple plastic struts to hold a couple of spring-loaded wires apart. Nothing revolutionary as far as parts go but it was the moment I realized the value of a printer.

Since then, I have used OpenSCAD because that is what I saw the first time but the intuitiveness of other programs led me to develop the OpenVectorKB which allowed the ubiquitous vectors in OpenSCAD to be changed at will while keeping the parametric qualities of the program, and even leveraging them.

All three values in a vector, X, Y, and Z, are modified by twisting encoder knobs. The device acts as a keyboard to

There is no software to install and it runs off a Teensy-LC so reprogramming it for other programs is possible in any program where rotary encoders may be useful. Additional modes include a mouse, arrow keys, Audacity editing controls, and VLC time searching.

Here’s an article in favor of OpenSCAD and here’s one against it. This article does a good job of explaining OpenSCAD.

[Editor’s note: This is a Hackaday writer’s hack, hence the “I” in place of the usual “we”. We all love custom peripherals though, and a good number of us love OpenSCAD, so you could probably read it either way, but we don’t want to take credit for [Brian]’s work.]

A project by Chris Bell, Liangjie Xia, and Mike Kelberman called Rotobooth is a hacked rotary phone that takes your picture as you’re calling your own cell phone, then sends a link of the photos to you by SMS.

The rotary phone was hacked using Arduino, the photos were collected on a Flickr page, and finally the SMS notification is sent using Twilio. The exterior design is clean (dig the orange phone!) and recently took 3rd place at Twilio’s Photohack Day 2.

Tweephone is a rotary phone Twitter client, even your grandma could love

The collectives behind the Tweephone, UP digital Bureau and Unteleported tech agency, claim that it's the first analog Twitter client. We find that hard to believe but, while we've seen rotary phone-based Twitter tools before and analog meters that measure microblogging activity, we couldn't come up with a single example of a client that lets you punch in messages through non-digital means. Even if it's not the first of its kind, the Tweephone is still a pretty neat hack. Inside the old-school chassis is the ubiquitous Arduino, which interprets your pulls of the dial as letters. Like a phone with only a dial pad, you'll have to ring up numbers multiple times to get the right letter (i.e. dial "2" three times to get a "c"). It definitely not the most efficient method for sending out 140-character missives, but certainly one of the more unique. Check out the video after the break to see it in action.

Continue reading Tweephone is a rotary phone Twitter client, even your grandma could love

Tweephone is a rotary phone Twitter client, even your grandma could love originally appeared on Engadget on Tue, 01 Nov 2011 19:04:00 EST. Please see our terms for use of feeds.