The best tech toys for kids

It may have been another long year, but the holidays are finally approaching — and, with supply chain issues plaguing retail, it’s best to get your shopping done sooner rather than later. This year we’re all a little burnt out on screens, so the best gifts for kids are things they can hold. But, since this is Engadget, we’re always looking for that tech angle. This year’s crop of tech toys for kids is mostly grounded in the real world, with a few electronic twists to surprise and delight.

It’s always good to grab a few stocking stuffers, and Funko makes figures from what feels like every pop culture property on earth. Around here we’re partial to the video game ones, of course, and what’s more festive than this adorable Spider-Man all dressed up for the cold weather? It’ll look great while also adding a bit of geeky holiday cheer to someone’s bookshelf or desk.

For kids who aren’t old enough to build their own lightsaber at Disney’s Galaxy Edge, this kit from Hasbro might be the next best thing. Not only is it way more affordable, but it’s also quite durable, allowing kids and adults alike to reenact their favorite Jedi versus Sith battles with gusto. Best of all, a child can rebuild their lightsaber again and again using different parts, so they can have a customized weapon that fits their mood each day.

Maybe taking care of a small creature was just too stressful for your kid, and you’ve had to console them many a time when the little ghost floating above a tombstone appears. Well, now Tamagotchi has a special astromech droid they can take care of instead, one they have to clean and play a variety of mini-games with. If they don’t take care of little R2, the Jawas will take him away which might still be a bummer but hey, maybe they’ll sell him off to a local moisture farmer with a thirst for adventure.

Kids are cute, but also weird and quirky, so why not get the child in your life something that reflects the more wild side of their personality? Purse Pets are basically living bags that can hold stuff but also blink, purr and even blow kisses at a child when it’s happy. It’s a real eye-catching accessory, one that will have them feeling like they’re on the runway — especially when you activate the Purse Pet’s runway music.

Barbie first went to space way back in 1965 and, while she’s had plenty of spacesuits over the decades, none have been as realistic as this one. That’s because this one is based on real-life space explorer Samantha Cristoforetti, an Italian astronaut who was once the record holder for the longest space flight by a woman. Your kids can reenact her various scientific experiments in space with the doll, then cheer on the real-life Cristoforetti next year as she commands ISS Expedition 68.

It feels like an unwritten rule that every child has to have one of those wooden train and track sets. Why not spice things up a bit by adding in this tech-enabled station that signals the included train to stop and flash its lights, just like the real thing. If your kid is a railfan you can even use the free Smart Tech Sound app to change the sounds to those from famous systems like London, Paris or Berlin.

We were all super jealous of Harry Potter when Hagrid presented him with a lovely snowy owl who would become his mail carrier and friend. However, in real life owls can be pretty messy and aren’t as affectionate. So why not get your loved ones this interactive, life-sized replica instead? She loves to be petted and while she can’t fly, she can safeguard letters for you, only releasing them to people who have the secret code.

The Got2Glow Fairy Finder may look like a slightly fancier mason jar, but it has a special electronic twist. When you open the lid, a fairy will “fly” inside and show up on the front screen. What kind of fairy? It depends on how a child holds the jar and how bright the room is. There are 100 different magical creatures to collect and trade with their friends, so it should keep your kids active and busy for a while.

Your child may not be old enough to drive a real car, but chances are they’ve taken a few spins around Rainbow Road in Nintendo’s Mario Kart video games. And even if they haven’t, they’ll still enjoy playing with the whimsical vehicles from the series, recreated in 1/64-scale so they can fit in the palm of a kid’s hand. All the favorites are here, from Mario to Yoshi and even the often-forgotten Waluigi. Some of the karts even include gliders so kids can simulate some of the more treacherous jumps like Peach’s Castle.

We’ve been a big fan of the Mario LEGO sets since their launch, but now it’s time for his brother to have a little time in the sun. It’s just like having a Super Mario game you can physically build and hold in your hand, complete with platforms, a see-saw and blocks. Luigi will even react to the course thanks to a small LCD screen embedded in his chest, and he’s fully compatible with the other sets so you can build a whole world for him to explore.

You can still call it the Slave I if you want, but the most important thing about this Firespray-31-class spacecraft is who it belongs to: the most feared bounty hunter in the galaxy, Boba Fett. He even has his own show coming out at the end of December. We know that’s a long time to wait, but your family can at least spend part of that time putting together this 593-piece kit that even includes a tiny minifig Boba and Din Djarin from the Mandalorian.

There are toys that laugh, eat, burp and even poop, but there aren’t a lot that give birth. That’s probably because it’s pretty weird, but Spin Master’s Peek-a-Roo also makes it pretty adorable. This plush panda will react to being petted and spoken to by a child and, if the toy is treated well, it produces a tiny baby from the pouch in its stomach. The baby toy will continue to live there once born, popping up whenever its mama is happy.

Advent calendars are a great way to get your kid excited for the holidays, but sometimes the little gifts inside aren’t so great. Why not go full-on nerdy with this Star Wars calendar, which has a smattering of tiny sets your kid has to build alongside minifigs of characters like Rey, Luke Skywalker and a holiday-themed Poe Dameron? The kits will hopefully keep them busy so they’re not asking you how many days are left until the big gift-giving occasion.

Kids love cameras but, with everything digital these days, there’s a little less tactility, which kids also love. Printcams tend to be too expensive for many adults, never mind children, which makes them a no-go — until now. The VTech KidiZoom prints photos for as little as a penny, so it’s not a big financial deal when your child takes 100 photos of their feet. Just make sure you keep them stocked up with fresh paper.

Sabertron: a foam lightsaber game that finally proves who's got the most midi-chlorians 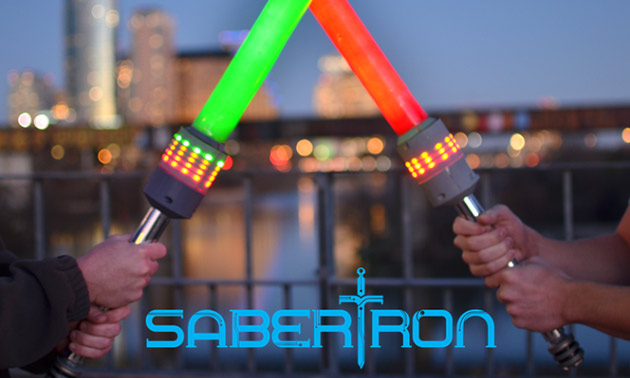 Chances are you've clutched a lightsaber or two in your time, whether that be an inexpensive imitation of the iconic Jedi weapon, or a deluxe model. You may even be a veteran duelist, but unless you're willing to commit murder with a Star Wars toy (or, someone else could just score the bout, we guess), then the dance always ends with no true victor. If you think that something with a name like Sabertron can't solve this dilemma, then these aren't the swords you're looking for. Just launched on Kickstarter, the idea of Sabertron is pretty simple: foam sword, electronics to detect blows, LED scoreboard above the grip. The current prototype uses an Arduino board with accelerometer to register hits, with Xbee handling the wireless connection so swords know when they've merely collided, and when to shut off LEDs after an opponent's successful strike. Also, a control panel and screen built into the grip lets you pick between different game modes for one-on-one combat.

During the year, LevelUp intends to created a chest/back mounted scoreboard with proximity detection that'll allow for multiplayer battles, with other accessories for the Sabertron range expected later. While it's aimed at Star Wars fans and live-action role players primarily, only a fun-sponge would be incapable of enjoying a few rounds of Alliance vs Empire with a buddy. And, with early bird pledges of $99 getting you a pair, breaking the will of Jedi scum doesn't have to break the bank.

Late last year, DARPA launched UAVForge -- a competition that invites contestants to create their very own unmanned aerial vehicles, and submit them for voter-based evaluation. The project is far from over, but competing teams have already started sending in their proof-of-flight videos, giving us a glimpse of what's to come. So far, it looks like the GremLion UAV (pictured above) is the early favorite, after coming out victorious in the first round of voting. Developed by a team from the National University of Singapore, the GremLion looks like a bite-sized Death Star and flies around using a coaxial set of rotors that expand tulip-style out of its shell. Also included in the UAVForge showdown is a guy known as X-MAUS -- an Arduino-controlled quadcopter that can apparently transform into a more aerodynamic plane form upon liftoff. And, rounding out the list of notables is a submission from TU Delft known as the QuadShot, which is basically a miniature B-Wing from Star Wars. Except it's real. Hit up the break to see all three in action.

DARPA's crowdsourced UAV competition heats up, takes off (video) originally appeared on Engadget on Wed, 08 Feb 2012 04:58:00 EST. Please see our terms for use of feeds.