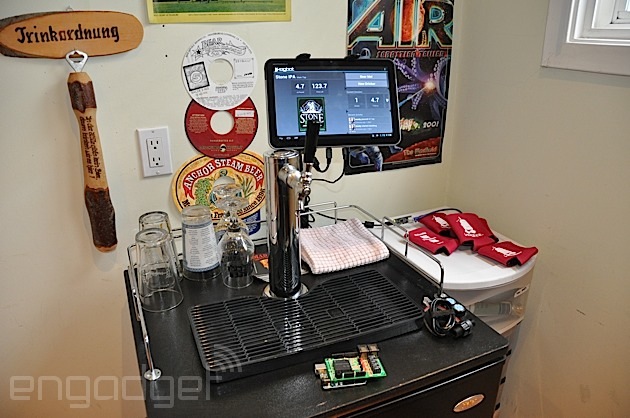 The idea of a connected kegerator isn't anything new. We've seen quite a few startups build high-tech kegs -- even Google has gotten in on the action. Those projects, however, require quite a bit of technical know-how. Now there's an easier solution for the beer enthusiasts: Kegbot. Kegbot is a bit different simply because it handles most of the geeky stuff for you. To get the device up and running, you just have to connect a flow sensor to your keg's line, and connect the pre-made board to your favorite Android tablet. With a minimal amount of effort, the device can track how much beer is left in your keg, who's drinking it and what days of the week you're consuming the most booze.

Creators Mike Wakerly and Eric Webb have been at the smart keg game for a while. The two originally sold Kegbot as a do-it-yourself open-source project. They realized there was a market for a little easier option, and developed the plug-and-play version they're currently raising money for on Kickstarter. We recently met up with the team to see the device in action. %Gallery-slideshow164837%