Automate your hydroponic garden with HydroBot

Hydroponics seems like a great way to get fresh vegetables at a cheap price, but as Scott Paterson and Max Knight found out, doing this type of gardening well can take a lot of work. To help take the guesswork and hassle out of the process, the duo has created HydroBot — an automated garden minder that uses an Arduino Leonardo along with a Raspberry Pi Zero for control.

HydroBot allows you to remotely monitor your setup, and automate tasks using wireless switching for lights and fans, as well as two pumps built into the apparatus’ housing to add nutrients to your grow-water.

The device is currently available on Kickstarter, and is also open source project, so you’ll be able to fix any bugs or even modify its behavior as needed! 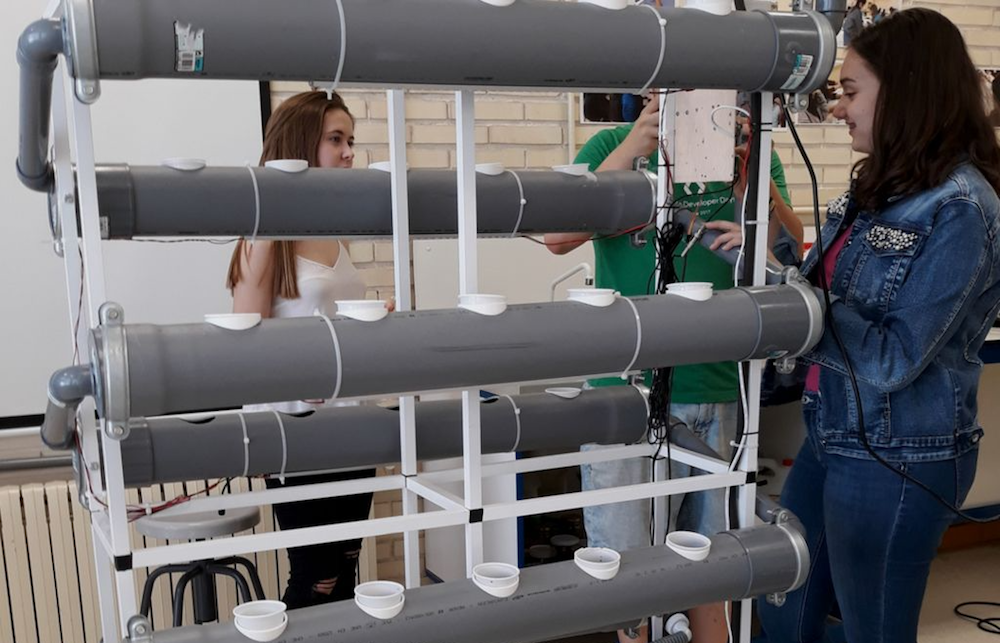 If you love electronics as well as plants, what better way to combine the two than with a smart hydroponic system? Students at the Juan de Lanuza School decided to do just that, creating a portable hydroponic assembly that’s automatically controlled with the help of an Arduino Mega.

The system uses six lengths of PVC pipe to house plants and pass a nutrient rich liquid solution through their roots. The control assembly measures elements such as temperature, humidity, and pH, then adjusts the lighting, water pump, and nutrient feeder to accommodate for conditions. 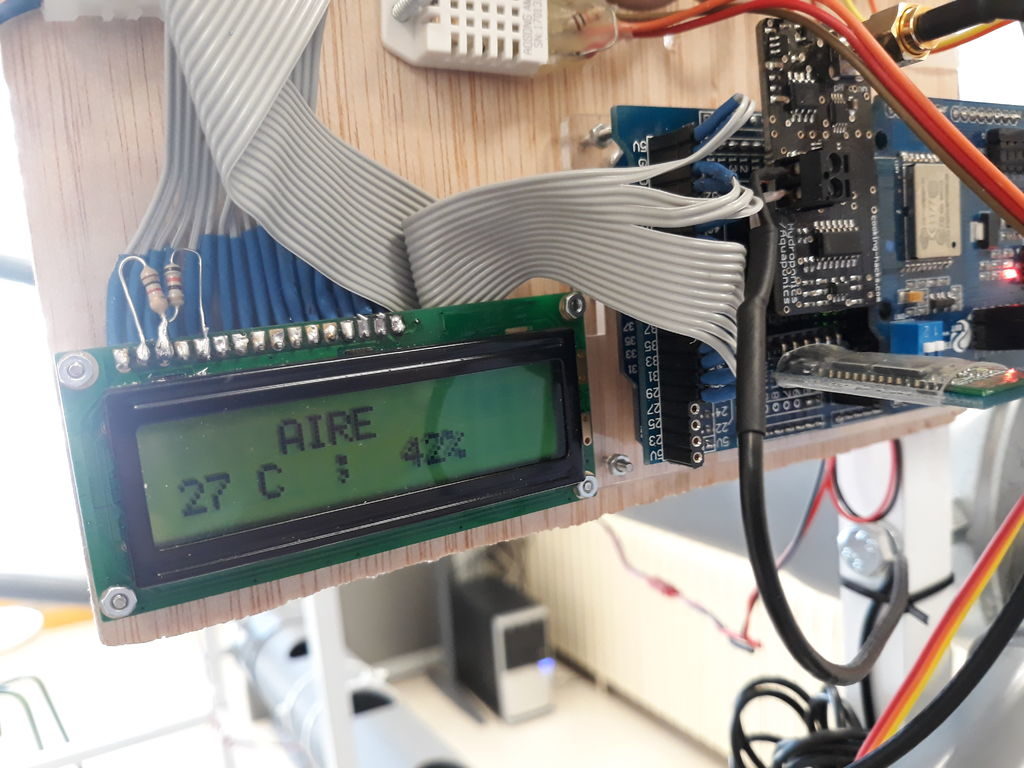 The device transmits data to ThinkSpeak for human monitoring, and also features a smartphone app for visualization. Build details are available here in English, or you can see a video of the setup in Spanish below.

Grow your own salad with this rotating hydroponic system 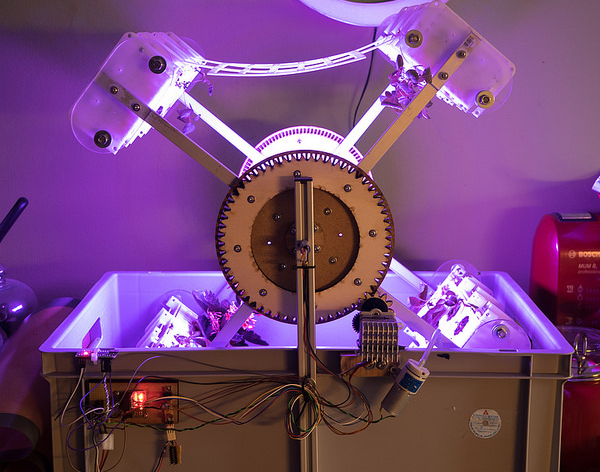 You likely know that growing plants via hydroponics involves some sort of water and fertilizer solution. Perhaps, however, you don’t realize that these plants need to be removed from the water occasionally in order to air out the roots. Normally, this means that the water is raised and lowered.

Peter Fröhlich, though, decided to go a different route, and came up with a device to physically raise and lower the plants using a large wheel, resembling a sort of Ferris wheel for plants!

The frame itself is a plastic bin he purchased at a local hardware store, while the wheel and its arms were made with components lying around his lab and other laser-cut parts. To make this interesting setup turn, he used a stepper motor from an old printer, controlled by an Arduino and stepper driver. 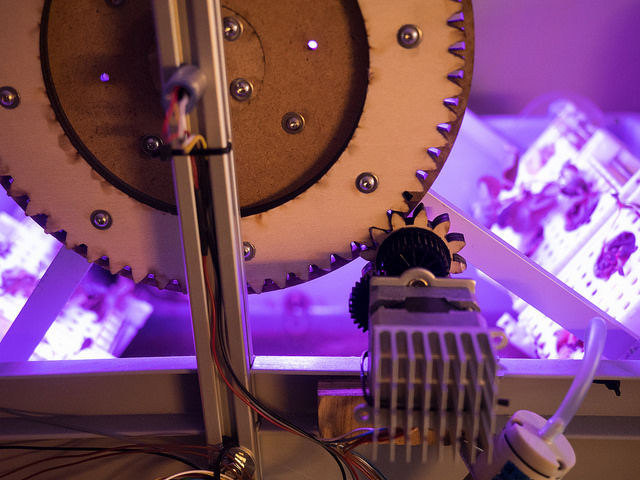 Want to grow your own salad right inside your home? You can find more details of this fascinating build in Fröhlich’s project write-up and on Hackaday here.

[Dan Bowen] describes the construction of a backyard hydroponics set-up in an angry third person tirade. While his friends assume more nefarious, breaking, and bad purposes behind [Dan]’s interest in hydroponics; he’d just like some herbs to mix into the occasional pasta sauce.

Feel particularly inspired one day after work, he stopped by the local hardware store and hydroponics supply. He purchases some PVC piping, hoses, fittings, pumps, accessories, and most importantly, a deck box to hide all the ugly stuff from his wife.

The design is pretty neat. He has an open vertical spot that gets a lot of light on his fence. So he placed three lengths of PVC on a slant. This way the water flows quickly and aerates as it goes. The top of the pipes have holes cut in them to accept net baskets.

The deck box contains a practically industrial array of sensors and equipment. The standard procedure for small-scale hydroponics is just to throw the water out on your garden and replace the nutrient solution every week or so. The hacker’s solution is to make a rubbermaid tote bristle with more sensors than the ISS.

Grow lettuce for life with the Arduino 101

Did you know that if you take a head of romaine lettuce and eat all but the bottom, then place it in a bowl of water, it will regrow? This fun fact actually inspired Instructables user Evandromiami to develop a deep water culture hydroponic system that would optimize the process for him.

The lettuce is grown on top of a five-gallon plastic bucket filled with water under full spectrum lights, while an Arduino 101 monitors the light, humidity, temperature, water, and pH levels measured by a set of sensors. The system is controlled over Bluetooth, which enables the Maker to adjust settings and receive notifications on an LCD screen. All the electronics, including the Curie-based board, are tucked away inside a power strip and the entire hydroponic farm lives inside an A/C closet. 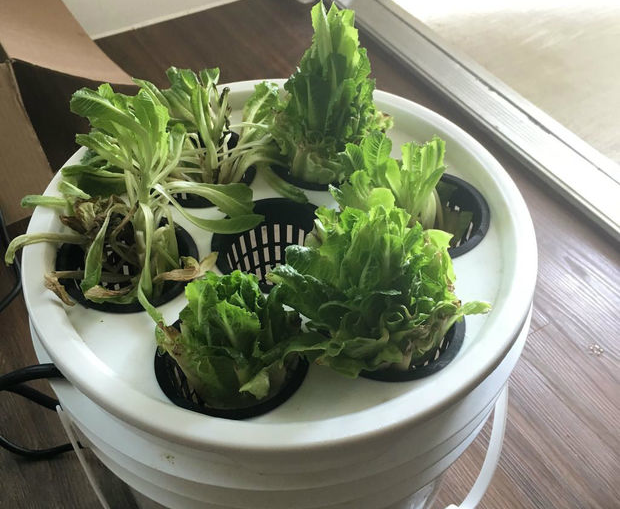 The Arduino 101-driven project continues to be a work in progress, but Evandromiami has already begun to expand into other veggies like tomatoes. Ready to get into the world of hydroponics? Check out the Maker’s entire write-up here.

Controlling the pH level of a solution is usually a tedious task. Adding an acid or base to the solution will change the pH, but manually monitoring the levels and adding the correct amount isn’t fun. [Reza] rigged up an automated pH controller to keep a solution’s pH steady.

The build uses an Arduino with a LCD shield, screw terminal shields, and [Reza]‘s own pH shield attached. A peristaltic pump is used to pump the pH down acid into the solution. This type of pump isolates the fluid from the pump parts, preventing contamination of the solution. The pump is controlled using a PowerSwitch Tail, allowing the Arduino to control the flow of fluid.

An Omega pH probe is used to read the pH level. [Reza]‘s open source firmware has support for calibrating the probe to ensure accurate readings. Once it’s set up, the screen displays the pH level and the current state of the system. The pump is enabled when the pH rises out of the desired range.

After the break, check out a video walk through of the device.

If you’ve ever walked around West Oakland, farming probably doesn’t come to mind. That’s because it’s the fifth busiest shipping port in the United States. But that hasn’t stopped maker Eric Maundu from feeding himself with locally-grown food from his aquaponic gardens, a combination of fish farming and hydroponic planting. Frequently proclaiming, “I am not a farmer,” Eric has applied his robotics and software background to making gardens smart.

“I feel knowledge of electronics and software programming makes me a better farmer than just having a hoe. Gardens that can communicate for themselves using the internet can lead to exchanging of ideas in ways that were not possible before. I can test, for instance, whether the same tomato grows better in Oakland or the Sahara Desert given the same conditions. Then I can share the same information with farmers in Iceland and China.”

His company, Kijani Grows, sells kits, components, installs gardens throughout the Bay Area, and teaches classes on aquaponics. This inspiring video from fair companies gives an epic walkthrough (note the length of the video – how leet!) of his various indoor & outdoor systems and designs:

Filed under: Arduino, Home and Garden