This incredible word clock is controlled by 114 servos

Word clocks normally use an array of lights to show the time, and although this project does use lights, how it works is much different than others.

LEDs for the device are hidden behind a thin layer of PVC, while 114 tiny SG90 servos move the lights and their 3D-printed frames back and forth. The result is a stunning display where the time is spelled out by the appropriate letters. These progressively come into focus, setting them apart from inactive letters which appear to fade into the background.

An Arduino Nano drives the assembly, along with an infrared controller setup and an RTC module for accurate timekeeping. A demo can be seen in the first video below, and the very involved build process is highlighted in the second clip.

For this project I teamed up with a friend of mine which turned out to be a must because of the large effort of this build. In addition, my electronic and his mechanical skillset complemented each other quite well. The idea for this adaptation of the popular word clock came to us while we were making a regular one as Christmas gift. There, we noticed that it is also possible to project the letters from the back onto a white sheet of paper. At the time this was only a workaround solution to hide our crappy craftsmanship since we ended up with a lot of bubbles while attaching a vinyl sticker with the letters to the back of a glass plate. We then noticed that one can achieve interesting effects when bending the sheet of paper since the letters change size and become blurred. This made us come up with the idea to make a word clock where the letters are projected from the back onto a screen and can be moved back and forth to change the size of the projected image. At first we were a bit reluctant to build this project because of the costs and effort it takes when you want to move each of the 114 letters individually. So we tossed with the idea to make a version where just every word that is used to display the time can be moved back and forth. However, after seeing that the Epilog contest was coming up on Instructables asking for epic projects, and also after finding relatively cheap servo motors, we decided to go all the way and make a proper version where each letter is individually controlled by a servo

A Wordsearch Twist on the Word Clock

We love seeing new takes on existing ideas, and [Danny] certainly took the word clock concept in an unusual direction with his Wordsearch Clock. Instead of lighting up words to spell out the time, [Danny] decided to embrace the fact that the apparent jumble of letters on the clock face resembles a word search puzzle.

In a word search puzzle, words can be found spelled forward or backward with letters lined up horizontally, diagonally, or vertically. All that matters is that the correct letters are in a line and sequentially adjacent to one another. [Danny]’s clock lights up the correct letters and words one after the other, just as if it were solving a word search puzzle for words that just happen to tell the correct time. You can see it in action in the video, embedded below.

[Danny] went the extra mile in the planning phase. After using a word search puzzle generator tool to assist in designing the layout, he wrote a Processing sketch to simulate the clock’s operation. Visually simulating the clock allowed him to make tweaks to the layout, identify edge cases to address, and gain insight into the whole process. If you’re interested in making your own, there is a GitHub repository for the project.

Word Clocks are a great place to see innovation; you can go small like this micro word clock, you can push the concept for all it’s worth by adding heaps of weather data, or just go the extra mile on presentation like this walnut-finish clock.

A Different Sort of Word Clock

Our wonderfully creative community has a penchant for clocks. We have seen so many timepieces over the years that one might suppose that there would be nothing new, no instrument of horology that would not elicit a yawn as we are presented with something we’ve seen many times before.

Every once in a while though along comes a project that is different. A clock that takes the basic idea of a timepiece and manages to present something new, proving that this particular well of projects has not yet quite run dry.

Such a project is the circular word clock made by [Roald Hendriks]. Take a conventional circular wall clock and remove the hands and mechanism, then place LEDs behind the numbers. Add the words for “Quarter”, “Half”, etc. in an inner ring, and place LEDs behind them. Hook all these LEDs up to a microcontroller with a real-time clock, and away you go with a refreshingly novel timepiece.

[Roald]’s clock has the wording in Dutch, and the brain behind it is an Arduino Uno with the relevant driver ICs. He’s provided a video which we’ve put below the break, showing the clock in operation with its various demo modes.

We’ve seen so many word clocks over the years it’s best to give you a stream of them through our word clock tag. It’s good of this one to come along and refresh the genre.

Check the time on a beautiful wooden word clock 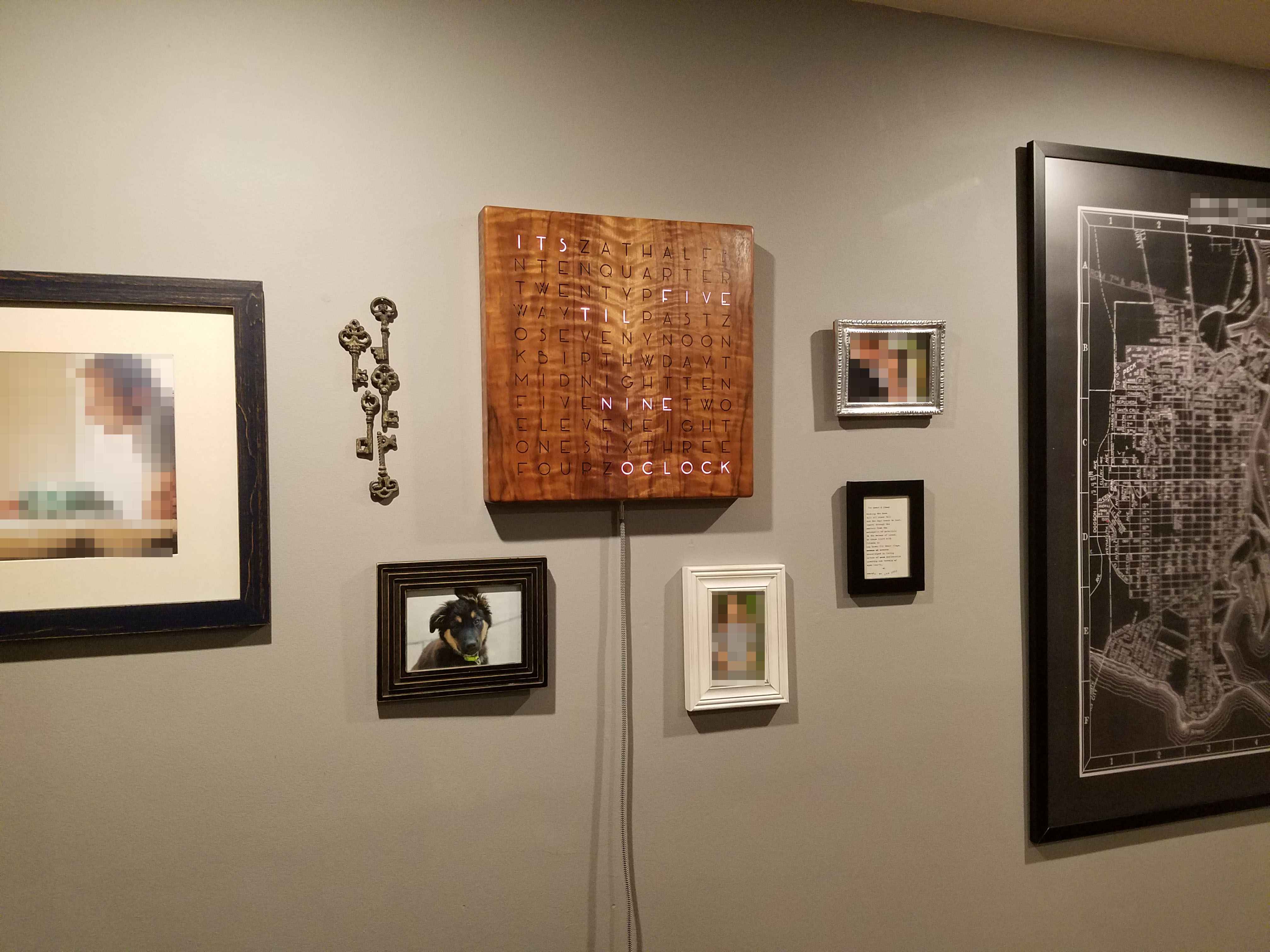 When it comes to telling time, Makers like to go beyond simply reading moving hands or looking at a digital display. In Imgur user Grahamvinyl’s case, that’s a slick word clock comprised of a walnut veneer, clear epoxy, LEDs, letters, and Arduino.

Grahamvinyl cut the clock from the back of an acoustic guitar and sides, and then strung together individually addressable RGB strips. A matrix of letters in Art Deco font spell out the time horizontally. Pieces of spraypainted 1/4-inch MDF act as dividers (so the color doesn’t bleed from one letter to the next), and a sheet of wax paper diffuses the light.

I haven’t seen another word clock designed the same way: clear epoxy holds the interior of the letters in place, so I didn’t need to use a stencil font.

The display changes every five minutes, and counts two minutes before and after the actual time (e.g. 10:13 and 10:17). Meanwhile, numbers that take longer to spell out such as “fifteen” are shown as “quarter past.”

The Arduino Uno-controlled clock also has a button on its side that allows it to show the numerical time—from far away, you’ll notice the illuminated letters actually create the shapes of numbers. The hours show up dimmer, the minutes brighter. Another push reveals the numerical date in the same fashion. You can even program it to flash a special message on your birthday.

Grahamvinyl notes that there are three buttons in total, each wired to an input on the Arduino. Right now, however, only the top one is functional. The idea is to eventually have the bottom two cycle through colors or set the time. Beyond that, the Maker hooked up a USB connection to the clock so that it would be easily programmable.

Interested in building your own word clock? Check out more images on Imgur, and find the code on GitHub.

Word clocks are cool, but getting them to function correctly and look good is all about paying attention to the details. One look at this elegant walnut-veneered word clock shows what you can accomplish when you think a project through.

Most word clocks that use laser-cut characters like [grahamvinyl]’s effort suffer from the dreaded “stencil effect” – the font has bridges to support the islands in the middle of characters like “A” and “Q”. While that can be an aesthetic choice and work perfectly well, like in this word clock we featured a few months back, [grahamvinyl] was going for a different look. The clock’s book-matched walnut guitar back was covered in tape before being laser cut; the tape held the letters and islands in place. After painstakingly picking out the cutouts and tweaking the islands, he used clear epoxy resin to hold everything in place. The result is a fantastic Art Deco font and a clean, sleek-looking panel to sit on top of an MDF light box for the RGB LED strips.

The braided cloth cable adds a vintage look to the power cord, and [grahamvinyl] mentions some potential upgrades, like auto-dimming and color shifting. This is very much a work in progress, but even at this point we think it looks fabulous.

A word clock – a clock that tells time with words, not dials or numbers – is one of those builds that’s on every Arduino neophyte’s ‘To Build’ list. It’s a bit more complex than blinking a LED, but an easily attainable goal that’s really only listening to a real time clock and turning a few LEDs on and off in the right pattern.

One of the biggest hurdles facing anyone building a word clock is the construction of the LED matrix; each LED or word needs to be in its own light-proof box. There is another option, and it’s something we’ve never seen before: you can just buy 8×8 LED matrices, so why not make a word clock out of that? That’s what [Daniel] did, and the finished project is just crying out to be made into a word watch.

[Daniel]’s word clock only uses eight discrete components: an ATMega328p, a DS1307 real time clock, some passives, and an 8×8 LED matrix. A transparency sheet with printed letters fits over the LED matrix forming the words, and the entire device isn’t much thicker than the LED matrix itself.

All the files to replicate this build can be found on [Daniel]’s webpage, with links to the Arduino code, the EAGLE board files, and link to buy the board on OSH Park.

[Joakim] has built a clock that spells out the time in words. Wait a second – word clock, what is this, 2009? Word clocks are one of those projects that have become timeless. When we see a build that stands out, we make sure to write it up. [Joakim's] clock is special for a number of reasons. The time is spelled out in Norwegian, and since the clock is a birthday gift for [Daniel], [Joakim] added the his full name to the clock’s repertoire.

One of the hard parts of word clock design is controlling light spill. [Joakim] used a simple 3D printed frame to box each LED in. This keeps the spill under control and makes everything easier to read. The RGB LED’s [Joakim] used are also a bit different from the norm. Rather than the WS2812 Neopixel, [Joakim] used LPD8806 LED strips. On the controller side [Joakim] may have gone a bit overboard in his choice of an Arduino Yun, but he does put the ATmega328 and Embedded Linux machine to good use.

The real magic happens at boot. [Daniel's] name lights up in red, with various letters going green as each step completes. A green ‘D’ indicates an IP address was obtained from the router’s DHCP server. ‘N’ switches to green when four NTP servers have been contacted, and the Linux processor is reasonably sure it has the correct time. The last letter to change will be the ‘E’, which reports ambient light.

[Joakim] added a web interface to trigger his new features, such as a rainbow color palette, or the ability to show minutes by changing the color of the letters K,L,O,K. The final result is a slick package, which definitely brings a 2009 era design up to 2014 standards!