How Many Punches Does it Take?

Do you ever wonder just how many punches you have thrown? The answer is going to be different if you happen to use a punching bag as part of your exercise routine. So is the case with the [DuctTapeMechanic] and while restoring an old speed ball punching bag, he decided to combine his passions for sports and electronics by adding a punch counter.

Perhaps most interesting in this build is the method used to monitor the bag. A capacitance proximity sensor most often used for industrial automation is mounted in the wooden base. He just calls it “an NPN capacitive sensor” without mentioning part number but these are rather easy to find from the usual places. It has no problem sensing each punch — assuming you swing strong enough so that the bag comes near the sensor. Two battery packs, an Arduino, and an optocoupler round out the bill of materials. We were a little disappointed not to see any duct tape in the construction of this project, but since the electronics are outside and exposed to the elements, maybe duct tape will be used to install a roof in a future episode.

The [DuctTapeMechanic] likes to repurpose items which would otherwise be thrown away, which is something to be applauded. The frame of this punching bag was welded from a discarded metal bed frame (a regular occupant of crawl spaces and self storage places), and you might remember he repurposed the electric motor from a discarded clothes dryer last month, changing it into a disk sander.

The core of the watch is an Arduino Mini. To make it good for time telling, a real-time clock module was added. A DHT11 monitors the temperature and humidity. A charge circuit and lithium battery provide power. Finally, the watch displays the date, time, and other data with an LCD from a Nokia 5110. We can tell you the last part that’s going to break on this.

Even if you think the watch is a bit chunky, the tutorial is very slick. [Alexis] has taken the trouble to individually draw and describe each portion of the watch’s construction. He explains each pin, what they do, and provides a Fritzing drawing of the wires to the Arduino. The code is provided; to program the watch a USB-to-serial module must be used.

For the housing he made a box from a thin gauge aluminum sheet and attached leather straps to the assembly. The final construction is cool looking in a techno-punk way, and is fairly compact. One might even say sporty.

This Tennis Racket Grunts Like Maria Sharapova When You Swing It 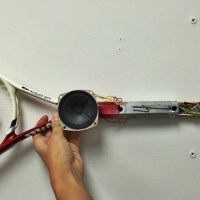 You don't actually need to grunt to get a good tennis swing, so why not let you're tennis racket do all the grunting for you.

The post This Tennis Racket Grunts Like Maria Sharapova When You Swing It appeared first on Make: DIY Projects, How-Tos, Electronics, Crafts and Ideas for Makers.

A yet another application of wearable electronics – to train blind athletes with pressure feedback.

A work that is a part of the Innovation Design Engineering (IDE) masters programme run jointly by Imperial College and the Royal College of Art has a team designing it, as part of course. Mining company Rio Tinto has launched a ‘Sports Innovation Challenge’ for new paralympic opportunities, ranging from equipment through to radical new sporting events and competition models.

“As a visually impaired person, you don’t develop the same kind of kinaesthetic awareness — so we began with how you can rebuild body awareness and how you can actually have a feeling of where your limbs are in space, if you lost your sight, for instance,” said IDE student Benedict Copping.

Noting that the vast majority of sighted athletes use coaching demonstrations or video-analysis techniques to perfect complex motion skills, Copping’s team wanted to find a way for blind athletes to similarly benefit.

The design comprises of wearable joint pads that record the position of the limb in space and keep this as a reference against predetermined angles, giving a graded vibration feedback as they match up.

Flex sensors, vibration motors (like those used in mobile phones) and an Arduino mini pro electronics board (for computation) are some of the easily available components that are used.

“If you’re visually impaired, because you can’t reflect on somebody else doing the motion, the coach moves the hand around, so what he’ll do is get the first position and press a button, store that, then [get a] second position, store that — so a combination of points together will build a picture. Then when you actually change movements, it will vibrate more and more until you get the correct position,” Copping said.

For creating the winning design, the Ghost team (which also includes Jason Cheah, Shruti Grover and Idrees Rasouli) will receive undisclosed funding from Rio Tinto to further develop the technology.