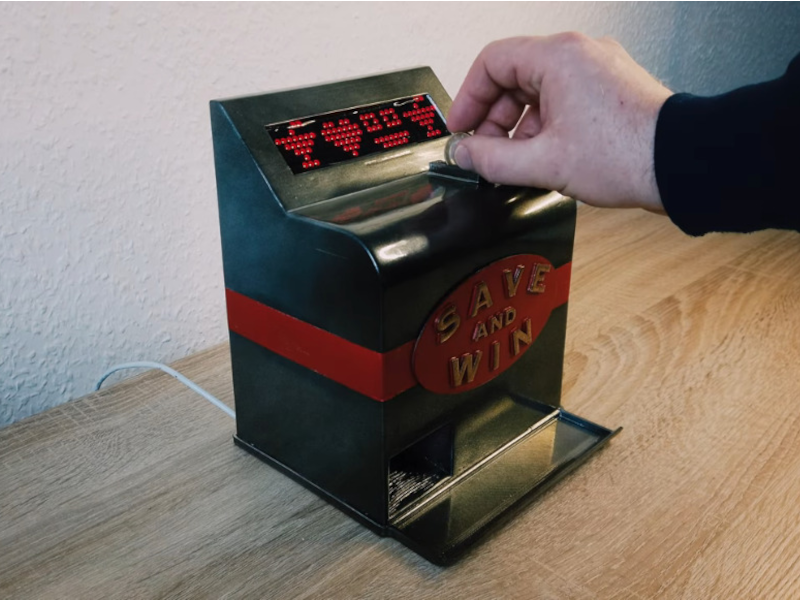 Saving money is inherently no fun until the time comes that you get to spend it on something awesome. Wouldn’t you be more likely to drop your coins into a piggy bank if there was a chance for an immediate payout that might exceed the amount you put in? We know we would. And the best part is, if you put such a piggy bank slot machine out in the open where your friends and neighbors can play with it, you’ll probably make even more money. As they say, the house always wins. 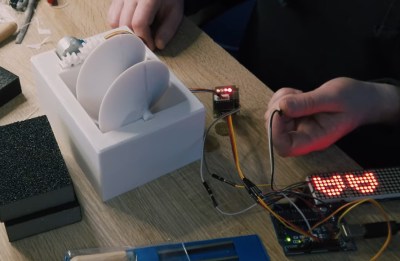 Drop a coin in the slot and it passes through a pair of wires that act as a simple switch to start the reels spinning. Inside is an Arduino Uno and a giant printed screw feeder that’s driven by a small stepper motor and a pair of printed gears. The reels have been modernized and the display is made of four individual LED matrices that appear as a single unit thanks to some smoky adhesive film.

This beautiful little machine took a solid week of 3D printing, which includes 32 hours wasted on a huge piece that failed twice. [Max 3D Design] tried rotating the model 180° in the slicer and thankfully, that solved the problem. Then it was on to countless hours of sanding, smoothing with body filler, priming, and painting to make it look fantastic.

If you want to make your own, all the files are up on Thingiverse. The code isn’t shown, but we know for a fact that Arduino slot machine code is out there already. Check out the build and demo video after the break.

As much as we like this build’s simplicity, it would be more slot machine-like if there was a handle to pull. Turns out you can print those, too.

Thanks for the tip, [zwapz]!

Slot Machine Has a Handle on Fun

For some reason, when slot machines went digital, they lost their best feature — the handle. Who wants to push a button on a slot machine, anyway? Might as well just play video poker. [John Bradnam] seems to agree, and has built an open-source three-color matrix slot machine complete with handle. 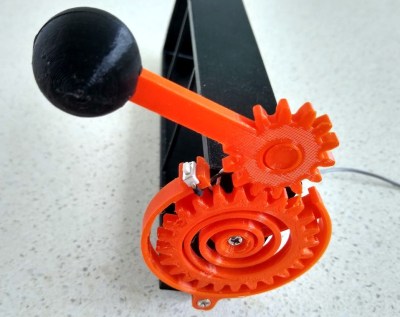 In this case, you’ll be losing all of your nickels to an Arduino Pro Mini. The handle is an upgrade to an earlier slot machine project that uses three 8×8 matrices and a custom driver board. When the spring-loaded handle is pulled, it strikes a micro switch to spins the reels and then snaps back into place. Between each pull, the current score is displayed across the matrix. There’s even a piezo buzzer for victory squawks. We only wish the button under the handle were of the clickier variety, just for the feels. Check out the short demo video after the break.

If you’re not a gambler, you could always turn your slot machine into a clock.

Jackpot!: The Trials And Tribulations Of Turning A Slot Machine Into An ATM

Have you ever wished that slot machines dispensed money as easily as an ATM? Well so did [Scotty Allen] from Strange Parts, so in collaboration with his friend [Matt] decided to combine the two. After a four-month journey fraught with magic smoke and frustration, they managed to build a fully functional ATM slot machine.

The basic idea is that you insert your card and enter your pin like on a normal ATM, select your winning amount, and pull the lever. This sets wheels spinning, which come to a stop with three-of-a-kind every time, and you win your own money as a bucket load of coins with all the accompanying fanfare. The project took way longer than [Scotty] expected, and he ended up missing his original deadline to show off the machine at DEF CON.

They started with an old broken Japanese slot machine, and replaced the control board with an Arduino Due after a lot of reverse engineering and hacking. [Scotty] did a cool video just on getting the original vacuum fluorescent display working. Integrating the ATM parts proved to be the biggest challenge, with number of very expensive parts releasing their magic smoke or getting bricked in the process. [Scotty] came up with an ingeniously simple hack to interface the ATM hardware with the Arduino. The cash note dispenser uses multiple sensors to detect if there are notes loaded and if one is successfully dispensed. These were spoofed by the Arduino, which controls two coin hoppers instead to dispense appropriate amount of quarters or pennies. The build was rounded off with some very neat custom graphics on the glass panels, and the machine was finally showed off at a local arcade.

This was an awesome project, and we can appreciate the fact that [Scotty] made no attempt to hide the real emotional roller coaster that anyone who has worked on a large project knows, but is rarely documented in logs. [Scotty] has made a name for himself by building his own iPhone from parts and touring Shenzhen’s many factories. Check out the videos after the break