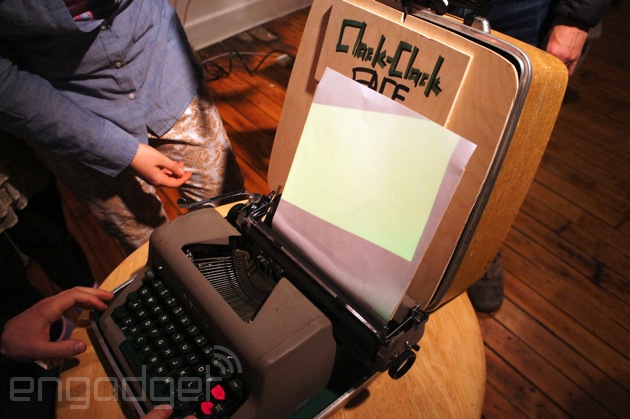 There's something oddly romantic about taking a piece of archaic technology and giving it new life as a work of 21st century art. Take the Royal Empress typewriter you see above. This particular model was built in 1961 and eventually landed in the hands of Amanda Gelb as graduation gift. She and her fellow classmates, Jinyi Fu and Quingyuan Chen, looked at the hunk of aging metal and saw potential instead of an obsolete writing tool. For their installation at the ITP Winter Show, they wired up each of the keys to an Arduino for tracking what a user types, then paired that with a tiny projector that displays the letters on a sheet of paper wrapped around the platen.

The "face" part of the equation comes from the webcam mounted to the top of the typewriter case. It uses brightness to map a silhouette of the person sitting in front of it and fills only the darkened areas with letters, creating an ASCII portrait in real time. The code also automatically loops the letters you type, so even if you press only a single key the picture will appear. Of course, you could also type out a love letter or a quick blog post and the whole thing will be wrapped inside the confines of your outline. When you're done, you can press the re-labeled print key and a laser printer spits out your portrait.

While there are already plenty of apps and sites out there that will automatically create ASCII versions of images, there's something alluring about sitting in front of gorgeous piece of hardware and creating it live. Plus, there are few things in this world as satisfying as pressing down the stiff keys of an old typewriter, hearing the titular onomatopoeia and seeing the letter appear before you. Especially when you know you're creating a work of art, even if you're a terrible writer.%Gallery-slideshow157402%