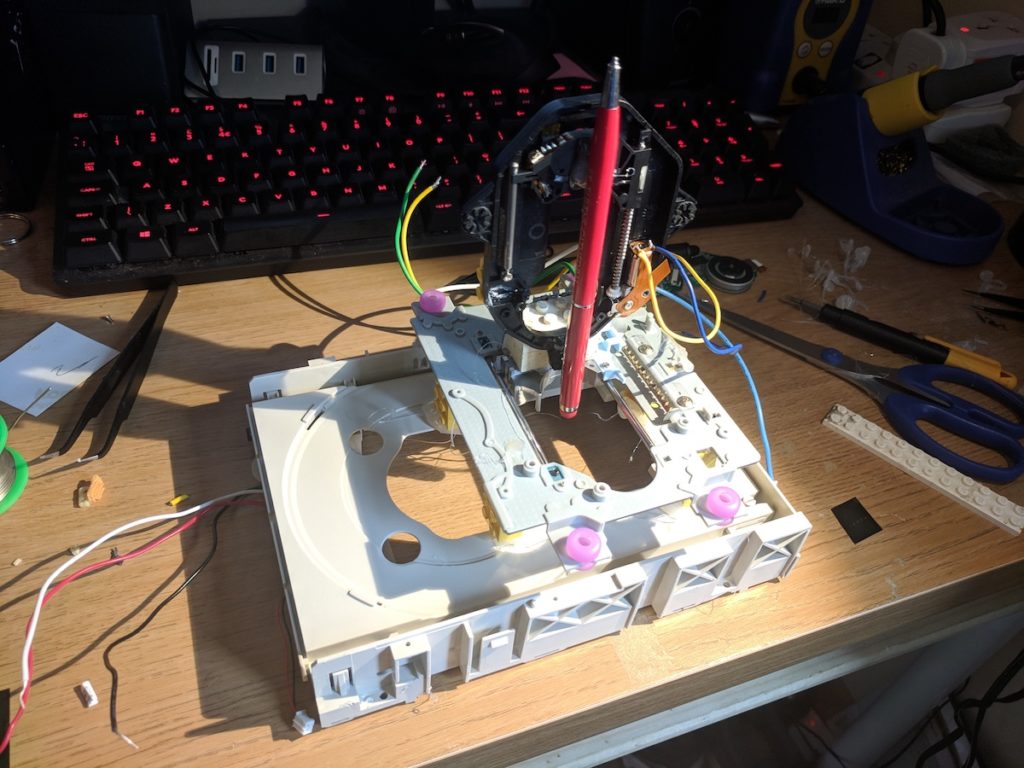 Even if you don’t have access to fancy tools like a 3D printer or CNC router, that doesn’t mean you can’t make something interesting. James, using only a “hot glue gun, some scissors, and a screwdriver,” was able to construct a rudimentary drawing robot that marks paper with a sharpie.

2 CD drives were creatively modified to form X, Y, and Z axes, letting him lower his writing instrument and draw. An Arduino Uno along with an Adafruit Motor Shield forms the controls for the device, and the structure is built out of LEGO bricks.

As of now it’s described as more of an “Etch A Sketch type thing,” but it looks like a great starting point for more advanced drawbots in the future! Code for the build is available on GitHub.

Make a Plotter Out of Rulers

Instructables user [lingib] made a clever and inexpensive pen arm plotter that uses plastic rulers for arms. An inspiring sight for anyone without a bunch of robot parts lying around,

The electronics are straightforward, with an Arduino UNO and a pair of Easy Drivers to control NEMA17 stepper motors connected to robot wheels, which serve as hubs for the rulers. At the end of the arms, an SG90 micro servo raises and lowers the pen as commanded, shoving the whole pen assembly off the paper with its horn—an elegant solution to an age-old drawbot problem. He even wrote wrote a custom Processing program that allows him to control the plotter from his desktop

[lingib]’s experimented with different kinds of drawing machines, including a drum plotter (video after the break), a V-plotter, as well as a rolling drawbot.

You’ll find tons of Hackaday posts about all types of drawing machines, including vintage plotters, plotters for making circuit boards, and even one built out of cardboard.

This Week in Making: Marble Machines, Filament Tips, and More 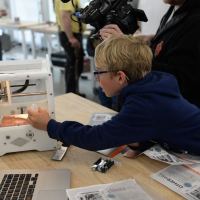 This past week we celebrate Arduino Day with Makers like, saw a new marble machine, and started a conversation about how coding is taught.

The post This Week in Making: Marble Machines, Filament Tips, and More appeared first on Make: DIY Projects and Ideas for Makers.

6 of Our Favorite Drawbot Projects 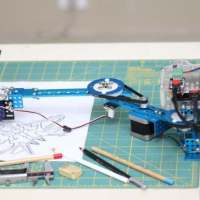 Check out these awesome drawbot projects for creating your own robo-Picassos.

The post 6 of Our Favorite Drawbot Projects appeared first on Make: DIY Projects and Ideas for Makers.

acorv built this sweet drawing arm* with an Arduino Uno and motor shield, two steppers and a servo, Meknex building set parts, and a Nintendo DS touch screen to guide it. Also see the previous version* previous version to see how the project evolved. [via Arduino] *Google translated from Spanish. [...]

Drawbot software aims to do it better than the rest

There are plenty of drawbot projects out there, many of which come with their own special software in tow. While some of these packages are easier to use than others, [Dan Royer] is pretty sure he can do it better.

Looking for a fun and engaging way to teach STEM subjects in schools across the country, [Dan] developed a relatively simple drawbot which can be constructed by a wide range of age groups. While he is trying to get schools to purchase his robot kits, we’re guessing that our readers would be more inclined to build their own.

So what does [Dan] have to offer that might interest you? Well, he says he has developed some drawbot software that’s pretty darn easy to use. Rather than multiple applications generating machine-specific code, his software will transform your picture into a line drawing in one easy step. The app uses a traveling-salesman algorithm to generate drawings with nary a crossed line in sight before outputting the resultant machine instructions in easy-to-use GCode.

We don’t have a drawbot of our own handy to test his software out, so if you do happen to give it a shot, let us know how it worked for you in the comments.

Knowing the length of each string and the distance between the servos gives us everything we need to use trigonometry to find the XY coordinates of the pen.  We can also do the reverse, which means we can find how much to change the strings to move from A to B. From there I added gcode support.  Lastly I wrote some Java apps to create a nice GUI.  If your arduino comes with the firmware already loaded then you don't even need to install the Arduino app. :)