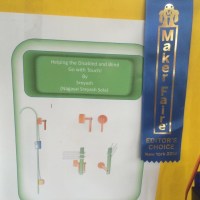 Sreyash's simple concepts could be very helpful to those with vision impairments. 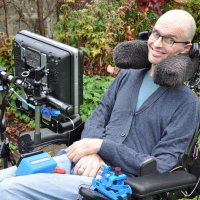 Eyedrivomatic uses the same technology utilized for text-to-speech in order to build a motorized wheelchair you can move with your eyes. The Funky Chicken was created during a series of workshops that were given as part of the larger project “Interactive Sensory Objects Designed for and by People with Learning Disabilities”:

It was designed by Rumena, a student from the Reading College LLD/D course (people with learning disabilities) who attended the workshops on a regular basis. She made the papier mache chicken, painted it and added the frills and ornaments, and wanted it to sit inside a basket but flap it’s wings and cluck. We helped her to complete this artwork by adding the necessary electronics including an Arduino Uno, Adafruit Waveshield, speaker and a servo to make the wings flap.

In the image below the sonar is hooked up to the Arduino Uno, and the Arduino is connected to the servo controller (not shown). The sonar is a very inexpensive off-the-shelf HC-SR04, which has a range of about 3m.

Here’s the video with the chicken at work: