The Sensor Array That Grew Into a Robot Cat

Human brains evolved to pay extra attention to anything that resembles a face. (Scientific term: “facial pareidolia”) [Rongzhong Li] built a robot sensor array with multiple emitters and receivers augmenting a Raspberry Pi camera in the center. When he looked at his sensor array, he saw the face of a cat looking back at him. This started his years-long Petoi OpenCat project to build a feline-inspired body to go with the face.

While the name of the project signals [Rhongzhong]’s eventual intention, he has yet to release project details to the open-source community. But by reading his project page and scrutinizing his YouTube videos (a recent one is embedded below) we can decipher some details. Motion comes via hobby remote-control servos orchestrated by an Arduino. Higher-level functions such as awareness of environment and Alexa integration are handled by a Raspberry Pi 3.

The secret (for now) sauce are the mechanical parts that tie them all together. From impact-absorption spring integrated into the upper leg to how its wrists/ankles articulate. [Rongzhong] believes the current iteration is far too difficult to build and he wants to simplify construction before release. And while we don’t have much information on the software, the sensor array that started it all implies some level of sensor fusion capabilities.

We’ve seen lots of robotic pets, and for some reason there have been far more robotic dogs than cats. Inspiration can come from Boston Dynamics, from Dr. Who, or from… Halloween? We think the lack of cat representation is a missed opportunity for robotic pets. After all, if a robot cat’s voice recognition module fails and a command is ignored… that’s not a bug, it’s a feature of being a cat. 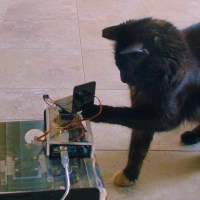 The Jetson TX1 Cat Spotter uses advanced neural networking to recognize when there's a cat in the room — and then starts teasing it with a laser.

[Domiflichi] likes his cats, but not the drudgery of feeding them. So, like any good engineer, this simple problem became his next project: building an automatic cat feeder. Based on an Arduino, his creation beeps to let the cats know that it is dinnertime, then dispenses food into a number of bowls. There are also buttons for manual control. This lets him give individual cats a separate feeding. Rounding out the feature set, a DS1307 RTC tracks the feeding times.

One of the most interesting parts of his build is the transfer from breadboard to protoboard. This usually involves taking apart a working version, then putting it back together and trying to figure out why it doesn’t work anymore. [Domiflichi]’s problem (detailed in a follow-up post) was figuring out how to program the real-time clock module to set the time, because it looses the time when you disconnect the power. Rather than use the Arduino to program the RTC,  he used the battery backup feature of the RTC chip, programming it on his computer and then soldering it onto the board. He went on to remove the backup battery after the chip was in place. That’s a solution that will no doubt have many readers waving their fingers disapprovingly, but it worked.

It may seem overly complicated, but his project is worth checking out to see how he approached some of the engineering challenges. The food hoppers themselves are off-the-shelf cereal dispensers. We’ve seen other designs bootstrap this mechanism with 3D printed augers.

If we had to imagine our dream DIY project chances are it would involve Arduino, Twitter and, of course, cats. How we'd combine those things we're not sure, but we'll admit to being big fans of Samuel Cox's eSleeper, which turns a hollowed-out eMac into a bed for his feline. Inside the shell is an Arduino Ethernet connected to an IR sensor, some LEDs and a sound shield. When the cat breaks the infrared beam it triggers the iconic Mac chime and turns on a series color-shifting LEDs for a little mood lighting. From there the clock starts ticking. When little Fluffy (Captain Whiskers? Matlock? Penny? Greg?) decides she's had enough napping and leaves the white plastic cocoon, tripping the IR sensor again, a random phrase is tweeted, along with the length of the cat's siesta. Check out the video after the break to see the eSleeper in all its adorable DIY glory.

eSleeper combines cats, Arduino and Twitter in an eMac shell (video) originally appeared on Engadget on Thu, 01 Dec 2011 06:34:00 EST. Please see our terms for use of feeds.