If Dorothy from The Wizard of Oz were to wake up in 2017, with her magic Ruby Slippers on her feet, she’d probably believe she had woken up in a magical world. But modern folks will need a little more magic to impress them. Like Clicking your heels thrice to get home with these Uber ruby slippers. [Hannah Joshua] was tasked by her employer to build a quirky maker project. She got an idea when a friend complained about having trouble hailing a cab at the end of a hard day at work.

[Hannah] started with ruby colored slippers with a platform toe and high heels to allow space to stuff in all the magic dust, err, electronic bits. The initial plan was to use an Arduino with a GSM/GPS shield but that would have needed a separate SIM card and data plan for the shoes. Instead, she opted for the 1Sheeld which connects to a smart phone over Bluetooth. The 1Sheeld gets access to all of the smart phone’s sensors including the GPS as well as the data connection. The Arduino and 1Sheeld are put in a cavity carved out in the toe section. The 9 V battery goes inside another cavity in the heel, where an activation switch is also installed. Three LED’s indicate when the shoe is active, the cab request is accepted, and when the cab is on its way.

The code is basic since this one of her first Arduino projects, but it gets the job done. It sends an http request to Uber’s API to request a cab. The destination is hard-coded, so the slippers only allow you to get from your current location to whatever destination is programmed. The GitHub repository provides code, as well as some additional information on construction. [Hannah] has also added notes explaining some of the design choices and things to take care about if you plan to build one of these magic slippers.

We covered the 1Sheeld when it was introduced several years back, and if you get your hands on one, try building this Hand Waving Door Unlocker.

Check the traffic autonomously on a modified clock 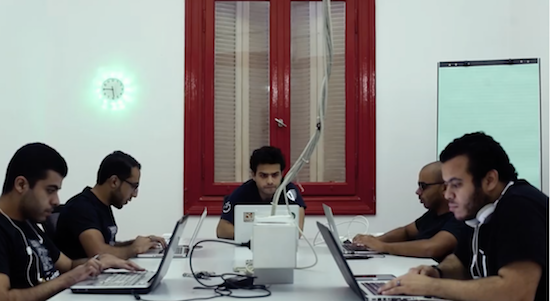 If you work in a traffic-prone area, there’s always a debate at to whether you should go home at the normal time or wait a few minutes to leave and avoid the traffic. To help make that decision, Ali likes to check the traffic before heading out. This might be fairly simply using a computer or smartphone, but doing so autonomously would be even better.

In a clever feat of automation, he embedded 12 RGB LEDs in a simple IKEA clock. These were then controlled by an Arduino Uno, using a 1Sheeld device to access the Internet through his smartphone. If traffic is bad, it displays as red, then blinks green when it’s time to go! A clever application in itself, something like this could be expanded for numerous uses, perhaps even involving animated lights.

Whenever it’s time to get off the office, I always check the traffic status to choose the best time to go home. But I couldn’t find a way to do that autonomously. So then…I was up to make a system that shows me the current traffic status with the help of a simple tool that is used probably in all the offices, a wall clock

In addition to the video below, you can see how to make one on 1Sheeld’s site or check out the discussion about this build on Reddit.

Unlock your door with a simple hand gesture 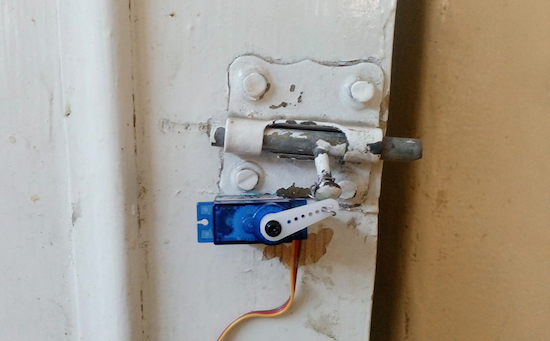 Gone are the days of fumbling with your keys! Adham Negm has come up with a way to open your door with a simple hand gesture while holding your smartphone.

To accomplish this, Negm uses an Arduino Uno, a servo motor to move the bolt, and a 1Sheeld to interface with the smartphone. The 1Sheeld reads the device’s accelerometer data, and then activates the servo when it recognizes a predefined gesture.

Sound like a hack you’d like to try for your room? You can find the entire project on Instructables.

Who doesn’t like the user interface in the movie Minority Report where [Tom Cruise] manipulates a giant computer screen by just waving his hands in front of it? [AdhamN] wanted to unlock his door with hand gestures. While it isn’t as seamless as [Tom’s] Hollywood interface, it manages to do the job. You just have to hold on to your smartphone while you gesture.

The project uses an Arduino and a servo motor to move a bolt back and forth. The gesture part requires a 1sheeld board. This is a board that interfaces to a phone and allows you to use its capabilities (in this case, the accelerometer) from your Arduino program.

The rest should be obvious. The 1sheeld reads the accelerometer data and when it sees the right gesture, it operates the servo. It would be interesting to do this with a smart watch, which would perhaps look a little less obvious.

We covered the 1sheeld board awhile back. Of course, you could also use NFC or some other sensor technology to trigger the mechanism. You can find a video that describes the 1sheeld below.

Togglit is a DIY automation kit for your home 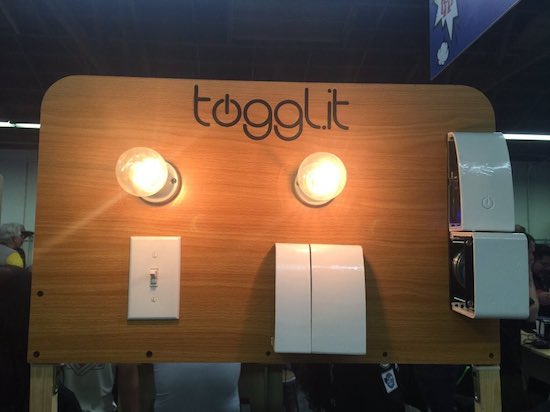 A few years ago, Integreight set out to turn your smartphone into more than 40 different Arduino shields. Now, the creators of the 1Sheeld have launched an open-source, fully-customizable home automation kit that will enable you to control your door locks, light switches and power strips using that very same mobile device.

“Togglit” can be assembled without any programming, wires, or hassle — only a screwdriver. For its debut at Maker Faire Bay Area, the connected interface was based on an Arduino Uno and 1Sheeld; however, the startup’s founder Amr Saleh notes that it can run on virtually any hardware platform, ranging from Raspberry Pi to other Wi-Fi products.

At the moment, Togglit is compatible with typical toggle light switches, standard deadbolts, as well as American and European power outlets. Ready to make your house smarter? The DIY kit is currently available for pre-order.

1Sheeld Turns your iPhone into a platform of Arduino shields 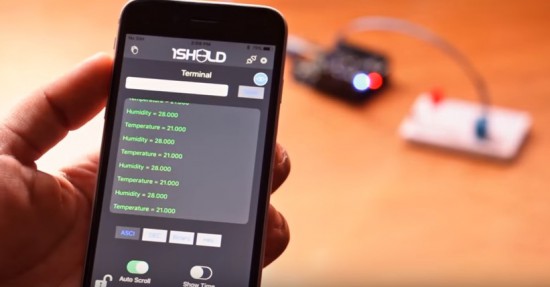 Have you ever thought of turning your iPhone and iPad into a platform of more than 40 Arduino shields? Now it’s possible!

The team of 1Sheeld have officially released the new 1Sheeld for iOS and it’s available for pre-orders for $39 instead of it’s original price $55 (shipping on May 2016).

You can  control robots, actuators, display sensors’ data and much more.  Take a look at the demo video:

Arduino Prototyping with your Android Phone

1Sheeld connects with and exposes the device’s sensors, actuators, and selected app APIs for easy access by the Arduino.