A leak hints that Twitter's upcoming subscription service, Blue, will cost $3 per month with features like Undo Tweets and Collections.
Engadget 15 May 20:16

LG has announced the pricing and availability of its 2021 soundbar lineup for the US.
Engadget 15 May 18:39

President Biden has revoked a Trump executive order that let the federal government intervene when companies cracked down on social media posts.
Engadget 15 May 18:07

Hitting the Books: Thank a Swede for saving your life the next time you wreck your car

Learn to make NFTs of your own art for $20

One hour of expert content taught by a marketing professional will help you start creating and listing NFTs in the marketplace.
Engadget 15 May 15:55

The Morning After: We reviewed the Samsung Galaxy Book Pro 360

Another robot is on Mars, and we reviewed Samsung's new laptop.
Engadget 15 May 12:15

Apple Stores in the US will keep mask mandates in place, for now 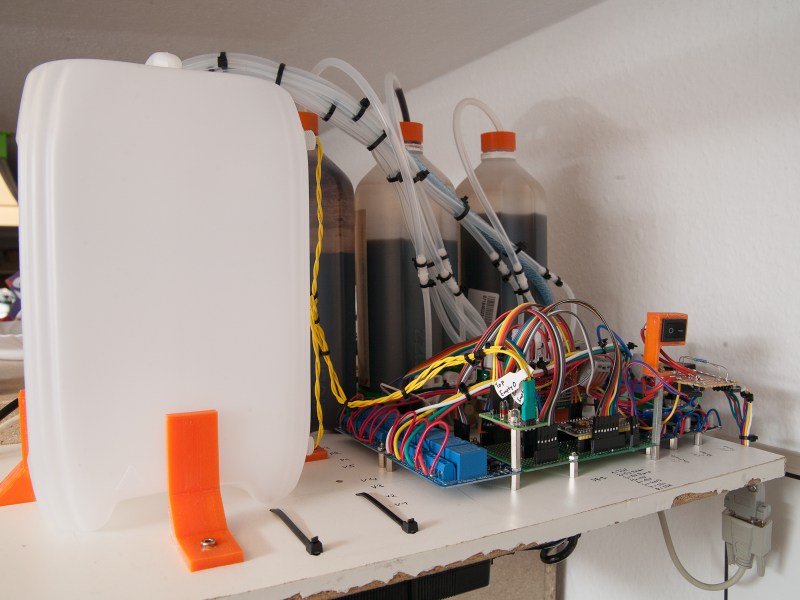 We’ve seen countless automated plant care systems over the years, but for some reason they almost never involve the secret sauce of gardening — fertilizer. But [xythobuz] knows what’s up. When they moved into their new flat by themselves, it was time to spread out and start growing some plants on the balcony. Before long, the garden was big enough to warrant an automated system for watering and fertilizing.

This clever DIY system is based around a 5L gravity-fed water tank with solenoid control and three [jugs] of liquid fertilizer that is added to the water via peristaltic pump. Don’t worry, the water tank has float switches, and [xythobuz] is there to switch it off manually every time so it doesn’t flood the flat.

On the UI side, an Arduino Nano clone is running the show, providing the LCD output and handling the keypad input. The machine itself is controlled with an ESP32 and a pair of four-channel relay boards that control the inlet valve, the four outlet valves, and the three peristaltic pumps that squirt out the fertilizer. The ESP also serves up a web interface that mimics the control panel and adds in the debug logs. These two boards communicate using I²C over DB-9, because that’s probably what [xythobuz] had lying around. Check out the demo video after the break, and then go check on your own plants. They miss you!

Don’t want to buy just any old peristaltic pumps? Maybe you could print your own.