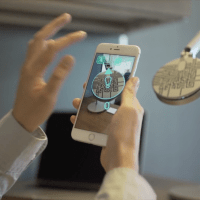 Augmented reality has yet to find a foothold in widespread applications, but MIT has just released an AR app that allows you to control IoT devices.