No kidding.
I was looking for a suitable application to demo with Wise Clock 4 placed vertically (that is, standing on its shortest side), when I found this hackaday post about Tetris on a LED matrix. The code, already written for Arduino, clean and easy to understand (kudos to Jianan), was a breeze to port. I only had to change a few functions (display, user buttons), comment out a few more (sound, text etc) and downsize from 7 colors to just 3.
Commands come from Bluetooth terminal ("BlueTerm" app on Android), basically replacing the buttons with letters (U, R, L, D; you got the idea).


The Wise Clock 4 vertical stand is possible thanks to the enclosure-mounted power jack, wired to the display's screw terminals, as shown in the photo below (that also captures a part of my messy desk). 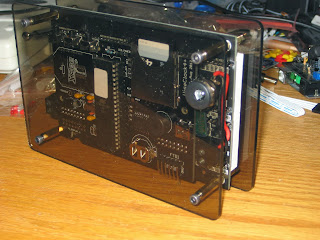 (This is a typical example of how one thing leads to another. I don't usually play games, but when I do, I use my implementations. "Time well wasted", as the saying goes.)