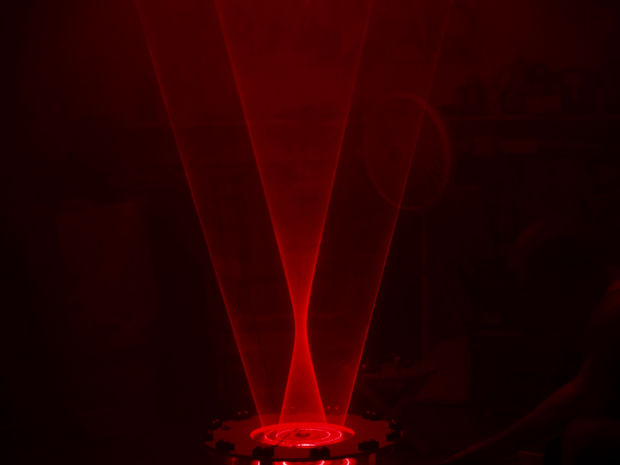 What’s better than a laser? How about two rapidly rotating lasers, attached to servo motors and controlled by an Arduino Mega? That’s exactly what Jon Bumstead made with his “Interactive Laser Sheet Generator.”

In addition to controlling the lasers, his device can sense hand motion on top of it using an array of 12 ultrasonic sensors, and can even coordinate music through a built-in MIDI output.

As seen in the demonstration video, Bumstead’s project–which was constructed with the help of a CNC router–looks like a cross between a coffee table and a test fixture for a space vehicle. When activated, a brushless motor spins the two lasers at a high speed, while the Mega controls the laser angles via two servos, creating a unique vortex-like light show!

I included distance sensors in the device so that the laser sheets could be manipulated by moving your hand towards them. As the person interacts with the sensors, the device also plays music through a MIDI output. It incorporates ideas from laser harps, laser vortexes, and POV displays. The instrument is controlled with an Arduino Mega that takes in the inputs of ultrasonic sensors and outputs the type of laser sheet formed and music generated. Due to the many degrees of freedom of the spinning lasers, there are tons of different laser sheet patterns that can be created.

You can find more details on the laser sheet generator on Instructables.